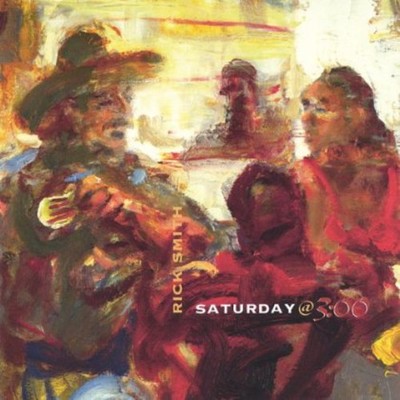 Rick Smith A drummer throughout his high school days, Rick picked up the guitar in college at the University of Pennsylvania in Philadelphia. Following graduation in 1983, he moved to South Africa and began to write his own tunes. In 1985 back in the US, he broke into the Denver and San Francisco club scenes at night, performing his songs and covering some of his favorite songwriters, while working a daytime job as an industrial sales representative. In 1991, Rick left corporate America ("couldn't face a life of white picket fences") and decided to devote himself full time to his music and traveled to Ireland, where he toured the country. At Taylor's Bar in Galway City he met his songwriting hero, John Prine, who helped convinced him to start his own record label; - 'cause Prine was having such a blast with his newly formed Oh Boy Records. So Kick Some Pigs was born. After a brief stint in Nashville at Bozo Jackson's place, Rick went home to Buffalo, NY where he put together his recording team: Charlie O'Neill, Jim Brucato and an accomplished Recording Engineer named Jon Mathias. Mathias had recorded such greats as Simon and Garfunkel, Dire Straits and Dicky Betts. Rick's first recording project "In The Leavin'" was released in 1992 and met with critical acclaim. Metro Weekend wrote, "In The Leavin' is a collection of mixed musical styles. There's a strong folk/acoustic influence ala Jimmy Buffet and James Taylor. There are also upbeat, almost rockabilly, moments. This is rolled together with Smith's sincere, honest storytelling lyrics that tug at your heartstrings or wrap you up in a warm happy glow. The CD is a winner from the first track to the final cut...The album is no bubble gum pop to suffer through, only the kind of material that makes you want to play the disc over and over again." The song "Dance With You" from "In The Leavin'" received true airplay on American and Mid-West Airlines In-Flight Music. He never cashed that first ASCAP check. From Buffalo back to Colorado, Smith began work on his 2nd CD. "Kickin' Back" was finally released in 1996 (It used to take a lot of scoots to record right on Analog). On Smith's "Kickin' Back" The Rocky Mountain News writes, "This singer/songwriter offers convincing evidence that a major label and a huge marketing budget aren't required to create good music...Smith has a warm winning sound." Then Colorado luminaries, Tim and Mollie O'Brien and Hazel Miller provide wonderful color to Smith's 2nd effort. Buffalo News praises, "Smith is in peak form here on his 15 songs that range from the country jig "Galway Train" to the jazzy "Isn't It Like The Moonlight," a wistful "Mitten In The Snow" and a melancholy "Schaefs." On Smith's latest and third release "Saturday @ 3:00," one critic writes, "Hear the good news yourself" So Kick Some Pigs...'Nuf said.