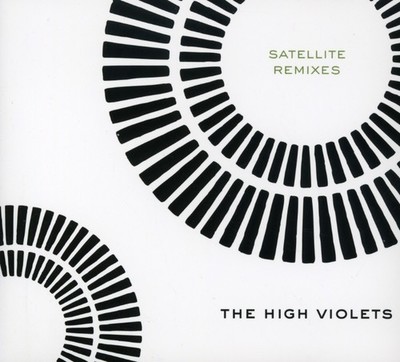 PITCHFORK 'Invoking the moody textures of old 4AD bands like Cocteau Twins. On last year's To Where You Are, the High Violets approached such pastimes from the vantage of a guitar band, helped by front woman Kaitlyn Ni Donovan's ethereal vocals, which at times recall the Sundays.' PM MEDIA REVIEW 'The High Violets seem poised to make indie/pop crossover history... With two well-crafted releases behind them, and the positive buzz growing around them, The High Violets could find themselves on many playlists in the coming year.' MAGNET MAGAZINE 'Kaitlyn ni Donavan has a voice that would melt the Jesus And Mary Chain's heart, and ballad 'Invitation' proves the Violets are capable of writing a great tune.' GRAVE CONCERNS 'To Where You Are is an exceptionally solid affair, an album that's consistently great from start to finish. With both accessibility and depth, it's an immaculately produced and energetic-yet-emotive outing that's likely to draw quite a bit of attention, and deservedly so. Highly recommended.' WILLAMETTE WEEK 'To Where You Are, an album imbued with an affecting, undeniable sensuality that will alternately start and end many relationships come Valentine's Day.' CMJ NEW MUSIC WEEKLY 'When shoegazer comes in vogue again look to the High Violets to be the band that signaled it's return. The ethereal voice of Kaitlyn Ni Donovan and the dreamy twin guitars are reminiscent of a gentle My Bloody Valentine or early Lush. "Chinese Letter" is as breezy as it is dense-even when the guitars are a wall of sound it is never over powering.' Songs from '44 Down' have been regularly featured on these shows: THE REAL WORLD, ROAD RULES, SORORITY LIFE and FRATERNITY LIFE. MAGNET MAGAZINE 'The Year In Music' Issue features The High Violets song '44 Down' on their 'New Music Sampler' (Vol. 27). ROLLING STONE MAGAZINE 'The High Violets - Shimmering, Starry-eyed ethereality.' ALTERNATIVE PRESS 'Dreamy, melodious songs fueled by Kaitlyn ni Donovan's wispy vocals and Clint Sargent's fluidly gorgeous guitar figures. '44 Down' should make you wobbly-legged...' THE OREGONIAN ' 44 Down - Seven tracks of shimmering sonic sensuality.' TIME OUT NY 'Recorded over a period of three years, 'To Where You Are' is worth the wait, especially for it's well crafted songs... The set's strongest track, 'Cool Green,' combines all the best traits of the High Violets's sound. At once mild and forthright, the song's scrambled synths, menacing riffs and floating melodies add up to a perfect pop ditty and a distorted dream in one shot.'

Here's what you say about
The High Violets - Satellite Remixes.