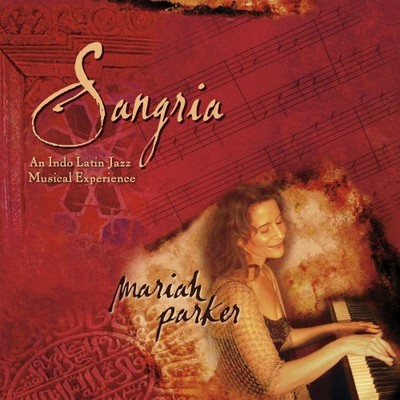 The world fusion music movement has spawned many intriguing new musical hybrids. In her debut recording, 'Sangria,' Mariah Parker blends the driving rhythmic syncopations of Latin jazz with the entrancing, asymmetrical meters of East India. Drawing musical inspiration from Brazil, Cuba, Spain, and India, Mariah's original compositions are compelling-adventurous yet accessible. Features musicians from the bands Ancient Future, Oregon, Sun Ra, and Herbie Hancock's Headhunters, along with top Indian percussionists. "This collection of eight original instrumentals by Mariah Parker is just one of many examples of the infusion of East Indian music into Western music, but to my ears one of the most successful." - AUDIOPHILE AUDITION "This is an excellent album from pianist Mariah Parker, whose work is best described as world jazz. Parker brings a wide variety of influences to 'Sangria,' ranging from Indian and Middle Eastern music to Afro-Cuban salsa and Brazilian samba. She obviously appreciates the Eastern-influenced spirituality and mysticism of John Coltrane, Yusef Lateef, Pharoah Sanders, and Lonnie Liston Smith, but her composing also contains elements of everyone from Pat Metheny to Chick Corea. Parker, of course, didn't invent the idea of world jazz.... but she keeps it moving forward; Parker takes chances, demonstrating that the fusion of jazz and world music still has plenty of possibilities after all these years -- and a global perspective serves Parker well throughout the rewarding 'Sangria.'" - ALL MUSIC GUIDE 'Parker kicks off her solo career with a well textured world beat date that finds her multi-instrumentalist abilities and her wide open ears leading the way. There's nothing but pros on board here who know what to do and they do it in a lively, spontaneous fashion that really grabs you. First class world beat that really covers the bases.' - MIDWEST RECORD.

Here's what you say about
Mariah Parker - Sangria.