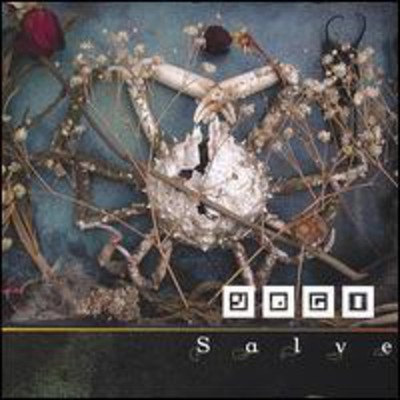 Just the facts, ma'am: Produced by: Yogi Co-produced by: Darin DiPietro Mixed by Yogi and Darin DiPietro Recorded at DiPietro Sound, Federal Way, Washington 'Tomorrow Never Knows (Slight Return Mix)' recorded, produced and mixed by: Andre LaFosse Personnel: Chris G: drums Bryan Beller: bass Yogi: Vocals, guitars Now for the wildly exciting ALBUM BIO: Salve is Yogi's second solo release for his own imprint label, Wonky Records. It's billed as an EP, rather than a 'full-length' album, even though Salve clocks in at over 40 minutes long - rather beefy for an EP. 'It doesn't have enough new material to really be referred to as a full album,' explains Yogi, 'but I'm hopeful that the sheer volume of stuff on there will satisfy folks that they haven't wasted their hard-earned cash. It's all new recordings, though some of the songs have been heard before in other configurations.' Fans of the aural assault found on Any Raw Flesh? will be pleased with new tracks like 'Owe You' and Yogi's version of the Beatles classic 'Tomorrow Never Knows', but they may be surprised at the more reflective and meditative tracks such as 'My Dismay' and 'The Ending.' 'I made it a point to try to explore subtlety on this album, after not having much use for it on Any Raw Flesh?' Yogi laughs. 'I wanted to come screaming out of the gate with the debut album, but I'd hate for anyone to think that all I'm about is blasting paint off the walls. And there are acoustic versions of 'Lois' and 'Firefly', which were fan favorites from the first record, and they sound quite a bit different with all the bombast removed.' Yogi again handles all guitar and vocal duties on Salve, and is joined once again by drummer Chris G and Mike Keneally Band bassist Bryan Beller. Salve began as a collaboration between Yogi and another independent guitarist and solo artist named Andre LaFosse. In 1999, Andre had released his groundbreaking first album Disruption Theory. 'Andre contacted me right around the time that Any Raw Flesh? was being finished up, and offered me a ton of really valuable advice that he had accumulated having released his own album independently a couple of years earlier,' says Yogi. 'We struck up a friendship, and during one of our many conversations I found out that he had done remixing work for other artists in the past. I asked him if he would have the time and inclination to prepare some remixes from the Any Raw Flesh? material, and he was hip to do it. I figured he'd do two or three remixes, and I could run back into DiPietro Sound and quickly record a couple of tunes I had decided not to include on my first album, and we could slap the whole thing together into an EP and get it out there with no fuss. That was the original idea, anyway.' Andre ended up creating close to 90 minutes of remix material, though only his 'Tomorrow Never Knows (Slight Return Mix)' is represented on 'Salve'. 'The rest will be coming out on a seperate album later this year,' says Yogi. 'That album will be called Half-Pint Demigod. I listen to it all the time, it's just so cool. Andre is a seriously talented producer and sonic alchemist, and I hope people who normally would turn up their noses at the idea of a 'remix' album will give this stuff a shot. There is some fabulously demented stuff on it.'

Here's what you say about
Shawn Farley - Salve.