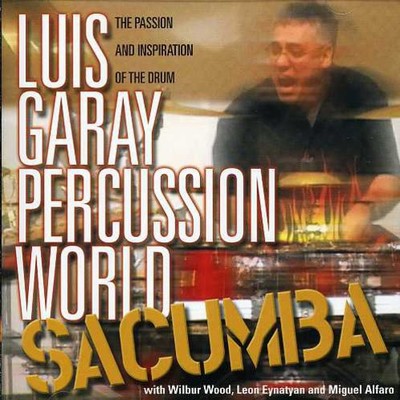 Described in the Washington Post as a 'percussionist of marvelous virtuosity', Luis Garay was born in Cordoba, Argentina, where he was principal timpanist for the Cordoba Symphony Orchestra. Residing in the US since 1992, he is percussion soloist and leader of Luis Garay Percussion World, a popular world percussion performing ensemble in the Washington D.C. area. Throughout his 30 year career, this classical, jazz, and Afro-Latin multi-percussionist has performed throughout the Americas and Europe. He has received many prestigious honors such as recognition by the U.S. Government as an 'Artist of Exceptional Ability,' a performance for Pope John Paul II in the Vatican, the Gold Medal from the International Rotary Club, the Team Leadership Award of the Group Study Exchange Program and a fellowship from Amalia Lacroze de Fortab at The Inter-American Music Friends and at the Organization of American States and The Catholic University of America and Margot Fonteyn. He has accompanied numerous top artists in concert and on recordings and is a well known percussionist in the nation's capitol. Some of Mr. Garay's performances include the Kennedy Center, The Organization of American States, Department of State, Smithsonian Institution, The Argentine Embassy, DAR Constitution Hall & Washington National Cathedral, and the Chinese Embassy. He is a member of The American Federation of Musicians, Washington, D.C. Local 161-710 and the Percussive Arts Society. Mr. Garay's received his Master of Music from The Catholic University Of America in 1994. Previously, he studied at the Cordoba State Conservatory where he later became Professor of Percussion. Additional advanced studies include the Escola de Musica de Brasilia in Brazil. He is also adjunct percussion faculty at Catholic University, director of the CUA Percussion Ensemble, the CUA World Percussion Program, and he is director and founder of the CUA Summer Lion Drummers program. He is on the faculty of St. Albans School, the National Cathedral School in Washington, DC, and is jazz ensemble director at Berman Hebrew Academy. While in Argentina, he founded the Cordoba Jazz Quartet and was director of Youth Percussionists of Cordoba. He performed with the New Music Group of Cordoba and was chairman, instructor and director of the percussion ensemble of the Cordoba State Conservatory of Music in Argentina for twelve years. Mr.Garay is in demand as a performer, instructor, adjudicator, clinician, director, composer, and conductor in the Washington DC area where he maintains a busy studio in Silver Spring, Md. Luis Garay proudly endorses these products: H3 DrumStick Wax, Grover Pro Percussion, SilverFox Percussion.

Here's what you say about
Luis Garay Percussion World - Sacumba.