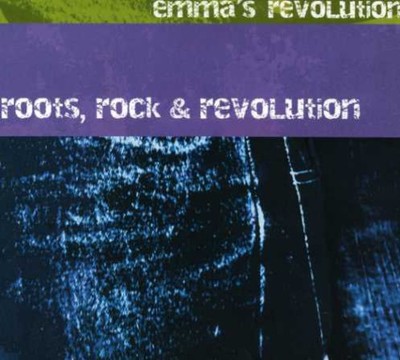 Dancing on the edge of folk and pop there's a revolution: Emma's Revolution. 'Bold, profound, moving, hilarious and transformative.' The sound of passion in 'deftly-turned phrases,' songs imbued with hope, warmth and the 'power and drive' to turn tears into laughter, cynicism into action. A motivating force in intimate concerts and mass demonstrations, infused with inspiration from the legacy of music for social change, Pat Humphries and Sandy O's dynamic harmonies are multiplied by hundreds of thousands. Emma Goldman stood for everybody's right to beautiful, radiant things. Join the revolution! Emma's Revolution is the duo of award-winning, activist musicians, Pat Humphries & Sandy O, who write songs that become traditions. Their song, 'If I Give Your Name' won Grand Prize in the John Lennon Songwriting Contest and their music has been featured on NPR's 'All Things Considered' and Pacifica's 'Democracy Now!'. 'Peace, Salaam, Shalom' is sung around the world and has been called the 'anthem of the anti-war movement.' 'Keep On Moving Forward' opened the NGO Forum at the UN Fourth World Conference on Women in Bejiing, becoming the unofficial theme of the Conference. Emma's revolution's latest CD, 'roots, rock & revolution' has been called 'Inspiring, gutsy and rockin'!' and includes, 'Silence & Lies' which is featured in the new documentary, 'Finding Our Voices'. In the spirit of Emma Goldman's famous attribution, 'If I can't dance, I don't want to be part of your revolution', Emma's Revolution brings their uprising of truth, hope and a dash of healthy irreverance to concerts and peace & justice events across the US (including Camp Casey with Cindy Sheehan and the School of the Americas Watch at Fort Benning, GA). They have performed by invitation at the World Culture Open in Seoul, Korea, the Scottish Parliament's Festival of Politics, Palestine & Israel, and, in December 2007, in Santiago, Chile with Holly Near. 'Across from the White House, we paused... We were arrested several hours later, having sung 'Peace Salaam Shalom' and 'All We Are Saying...' the entire time.' ~Alice Walker, Pulitzer Prize Winning Author 'The powers that be can control the media but it's hard to stop a good song... Pat's songs will be sung well into the 22nd century.' ~Pete Seeger on National Public Radio's 'All Things Considered' 'The epitome of great contemporary political music.' ~Sing Out!

Here's what you say about
Emma's Revolution - Roots, Rock & Revolution.