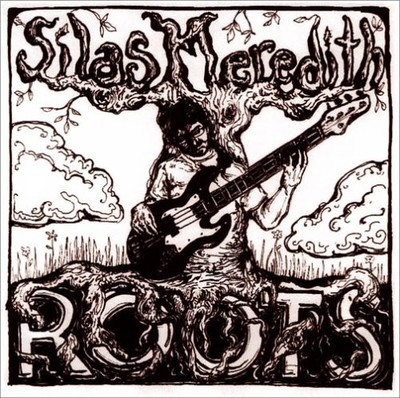 "Roots" is global roots rock at it's very best: flavorful tunes with a melodic sensibility that anyone can enjoy, without forgetting the weird meters and lush chords that make music worth playing in the first place. If you filed it with your CDs of American music, you would put it right between Paul Simon, Rufus Wainwright, Stevie Wonder, The Beatles, and Sting. You could listen to the whole album and never think twice about the simmering stew of musical history that "Roots" is drawn from; you would just think "Hey, these are catchy tunes!" But if you listen with a careful ear, you will hear that "The Winky Smile" and "The Wishing Well" are samba songs; that "Last Train from Grand Central" and "Puddle Jumper" are bossa nova songs; that "Good Old Days" is a soukous song patterned on Congolese star Kanda Bongo Man; you will hear that "Song for Mo" is patterned on the chimurenga style of the Zimbabwean singer Thomas Mapfumo. You will hear the roots. To make the album, Silas Meredith traveled the world looking for soul-moving melodies and rhythms. Then he came home, wrote the best 11 songs he's ever written, played them with the most talented musicians he's ever heard, and made the most infectious, funky, sweet, dancing, run-a-marathon, take-the-world-by-storm album that you could ever hope to hear. Silas Meredith is from Eugene, a small city in western Oregon with a thriving live music scene. He grew up listening to every kind of music imaginable. His "roots" extend beyond the pop music that filled the airways of the 80's and 90's: he was playing jazz in smoky barrooms before he was old enough to have a driver's license; his parents met dancing to Balkan music in 11/8 time signature; he listened to his friends play Zimbabwean mbira growing up; his high school prom had a salsa band. When he started playing music as a kid, he chose the string bass because almost every type of musical group includes bass. Since then, he has recorded two CDs with the Oregon funk band Soul Funktion, one CD with the New England jazz combo The Jazz Aesthetic, and two CDs with the New Haven salsa band Sonido. His roots are in all of these kinds of music. Silas composes and performs songs in both Spanish and Portuguese, and has been steeped in the samba and bossa nova of Rio de Janeiro, the salsa of San Juan, Puerto Rico, the son of Havana, Cuba, as well as highlife music of Ghana, the chimurenga of Zimbabwe, and Balkan dance music. It is his life's passion to go where the good music is, roll up his sleeves, and dig in. A bandleader in Minas Gerais, Brazil once told him (after a month-long trip to learn about música mineira and samba) "Silas, you know more people in my hometown than I do!" At college graduation, he received an award for "trilingual absent-minded singing." He plays actively with salsa band Sonido and Afro-Caribbean ensemble Dulcerito. Silas has performed across the United States, as well as in Brazil, Nicaragua, Ghana, Austria, Hungary, and the Czech Republic. There are only two continents where Silas has not yet performed: Antarctica and Australia. "Roots" was recorded with Harlan Brothers (guitar), Jerrod Cattey (drums), Adam Cushner (saxophone and voice), Peter Meredith (organ), and Eric Meridiano (keyboards). Vic Steffens at Horizon Music Group engineered the recording. The cover art was created by Kate Kokontis. Lyrics to "The Winky Smile" and "Loyal to the Brand" were written by Ian Melchinger.

Here's what you say about
Silas Meredith - Roots.