The Funky Mamas - Rollin' Along 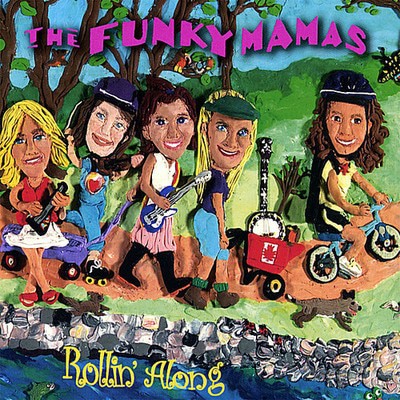 The second album from this well known Canadian Children's Band. The Funky Mamas much loved music is as sweet as it is fun for the whole family. This album will be cherished for years by parents and their children. April 2008 The Mamas are thrilled that Rollin' Along is A Parents' Choice Recommended Award Winner! Their review; 'Hailing from the great northern land of children's music (Ontario, Canada) The Funky Mamas is a delightful quintet that mixes the string bending fun of bluegrass bands like Uncle Earl, with the witty lyricism of Loudon Wainwright III. On Rollin' Along, they combine wonderful, lively renditions of traditional fiddle and banjo based songs such as 'Shortin' Bread,' 'Raccoon and Possum,' 'Jawbone' and 'Rattlin' Bog' with their own highly entertaining music. Original tunes include the witty French/English ode to cheese 'Hommage to au Fromage,' the inspired season counting, clapping song 'Goldenrod and Chicory,' and the fine French bunny song 'Mon Pitit Lapin.' Elsewhere, they do a fabulous rendition of the traditional '40 Years on an Iceberg,' which gradually increases in speed until it becomes a great frenzy. There is even a jazzy little ecology song called 'Breathe in the Air' which is sure to be a hit in classrooms and on playgrounds of the world, while the poem 'Book Nook' and the funky song 'Blast Off Into Reading' will be adored by librarians everywhere.' Lahri Bond ©2008 Parents' Choice Ontario City Parent- February 2008 'This Guelph collective of five moms has been twanging away since 1998. This is the follow up to their self-titled debut, and these musical balls of energy were clearly ready. We've got 16 songs here, most of them in English with a few French tunes tossed in. Every song has the strange quality of being rich in energy and feeling, yet feeling totally natural, as if the Mamas have been performing it for years. I'm going to credit this to the group's array of organic instruments - mandolin, pennywhistle, banjo and fiddle, to name a few - which they play with considerable skill. This skill makes the silly songs like 'Go Bananas!' sound fun and yet mature at the same time (I also mention this song because I love the 'who who' ing in it.) When the very earth-conscious Mamas put some of their ideas into songs like 'Breathe In the Air,' they succeed: instead of sounding didactic, they're able to get their message across while still making lovely music.' Guelph Mercury November 2008 'Out of the well known Guelph music scene, The Funky Mamas are sending musical waves across the Nation. The Funky Mamas released their second CD, Rollin' Along, to two full-house crowds in their hometown where over 800 parents and children, friends and relations danced, clapped hands, snapped fingers, and generally grooved with the Mamas at a free community event. The enthusiasm of the crowd for the highly interactive performance coupled with the strong CD sales speaks of the loyal following The Funky Mamas have gathered over the years. Since 1998, these five musical moms have performed for families after meeting at a playgroup with their 11 children. The Funky Mamas have performed across Canada, including such highlights as Toronto's Harbourfront Centre, Guelph's Hillside Festival, Winnipeg Folk Festival in Manitoba, Burlington's Sound of Music Festival, Lethbridge Children's Festival in Alberta, as well as numerous theatres, public libraries, schools, corporate and fundraising events. Their live performances are memorable and uplifting for families. Anyone who has heard The Funky Mamas knows how infectious their music is; Rollin' Along continues that tradition with a hand picked selection of delightful tunes and beautiful artwork. The Funky Mamas richly produced CD includes playful original songs written by the Mamas and traditional compositions in both French and English. It features spirited vocals and sweet harmonies that are enjoyable for both kids and adults alike. The Mamas include Georgia Urban on musical saw, guitar, mandolin, pennywhistle, bass, percussion; Tannis Maynard-Langedijk on guitar, ukulele and percussion; Kate Vsetula on banjo and banjo-ukulele ; Alicia Miecznikowski on bass, recorder and percussion (as well as CD cover artist); and Chantal vonMaydell, fiddle, bass and drums. Their first self- titled CD and this latest release also includes backing vocals by The Funky Kid Choir. Bluegrass and folk influences are strong in arrangements of traditional songs such as "Shortnin' Bread," "Alouette" "Raccoon and Possum," and "Rattlin' Bog," while funk and blues rhythms are infused into "Rollin' Along", "Blast off into Reading" and "Bananas Unite" The Mamas' strong commitment to environmental causes inspired the group composition, "Breathe in the Air" which has recently been made into a music video.'

Here's what you say about
The Funky Mamas - Rollin' Along.