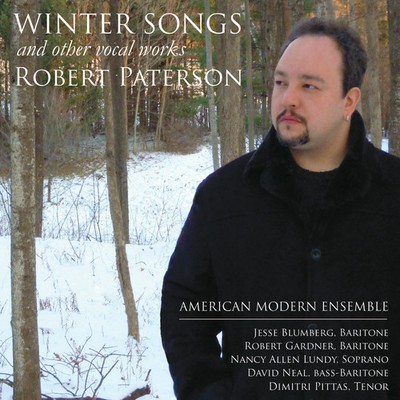 Winter Songs is the first album dedicated entirely to the vocal music of award-winning composer Robert Paterson. All works on the album are performed by the New York City based American Modern Ensemble and produced by multi-Grammy winning producer Adam Abeshouse. Each work features combinations of voice, flute, clarinet, violin, cello, piano and percussion. The featured vocalists are some of the finest in North America, including Jesse Blumberg, Robert Gardner, Nancy Allen Lundy, David Neal and Dimitri Pittas. The works on this album are inspired by a variety of diverse subjects, and in many cases, use unconventional texts. CAPTCHA, the first work on the album for tenor and piano, uses reCAPTCHA texts for each movement. CAPTCHA stands for Completely Automated Public Turing test to tell Computers and Humans Apart, and CAPTCHAs (or in this case, reCAPTCHAs) consist of combinations or real words and gibberish words. Selected reCAPTCHA texts were used for all of the movements. WInter Songs for bass-baritone and chamber ensemble consists of settings of winter-themed poems by A. R. Ammons, Billy Collins, Robert Creeley, Wallace Stevens and Richard Wilbur. Eating Variations for baritone and chamber ensemble is a setting of poems by New York City-based poet Ron Singer, and is a sendup on food faddism. The texts for Thursday for soprano and piano consist of fictitious answering machine messages, and Batter's Box for tenor and piano is a series of texts inspired by legendary New York Mets baseball catcher Mike Piazza. American Modern Ensemble (AME) joyfully celebrates and showcases American music, performing the widest possible repertoire, particularly by living composers. Our goal is to grow our audience base as far as possible beyond the music community. AME includes on-stage chats with featured composers, presents premieres, and conducts three annual competitions for young, emerging and professional composers. Receptions after each concert enable audience members to mingle with both composers and performers in an intimate, relaxed setting. Founded in New York City in 2005, AME has been a dynamic, creative force in the American new music scene. With a world-class ensemble made up of NYC's finest musicians, AME is 'simply 'first-rate' (The New York Times). AME has performed and premiered over 135 works by over 120 living American composers in venues ranging from Lincoln Center to Galapagos Arts Space, and has 'consistently demonstrated a flair for inventive programming' (Steve Smith, Time Out New York). AME programs both cutting edge and traditional works, presenting unique, engaging events that encourage dialogue between artists and audineces. AME is committed to that connection: over 90% of the composers whose works have been programmed by AME have attended our concerts. Sold out crowds at Merkin Hall, Dimenna Center, the Rubin Museum, The TimesCenter and many other venues are a winning testament to AME's tremendous fan base and ever expanding popularity. In 2012-13 AME was the ensemble-in-residence at the CUNY Graduate Center in New York City, and AME tours and offers educational outreach programs. Recent collaborations include the Dance Theater of Harlem and Talujon percussion ensemble.