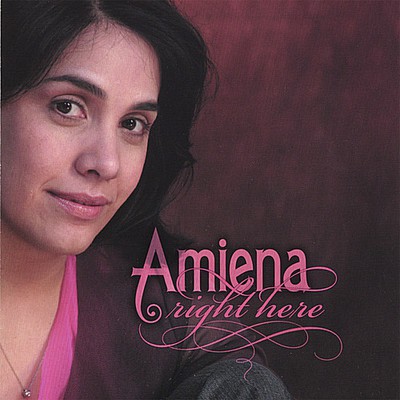 Amiena's love for music and variations of styles developed at a young age. Growing up in a home without television, Amiena spent most of her time listening to a wide variety of music. It was at an early age that she was introduced to the sounds of Lou Christie, Chicago, The Temptations, Carole King, Cheb Khalid, Billie Holiday, Etta James, The Bill Gather Vocal Band, Andrae Crouch, and Timothy Spell. They all quickly became her favorites and would later foster her own soulful style of popular eclectic sounds. Not surprisingly, at the age of five she ventured into her first solo performance of the standard 'Sunshine, Sunshine'. Thereafter, she pursued her evolving musical passion through vocal competitions, live performance, and humanitarian causes. Her dreams began and her one true love became clear - music. Like many young aspiring artists, Amiena questioned the practicality of music as a career. On the other end of the spectrum, she explored a career in Law. In the late 90's, she continued to write songs and perform; however, she also pursued her practical ambitions in the legal world, and obtained her degree. It was an intelligent 'back up' plan and a major accomplishment but her true love was still calling - she went back to music. In 2000, Amiena was asked to submit a song for a TV show. 'It's the Hope' did not air but the experience prompted Amiena to explore the multi media realm of producing music for TV & movies. Putting a literal picture to her music and lyrics was an exciting production process. Luckier the second time around, in November of 2006, 'Never Know' aired on the popular FOX TV show 'Bones'. 'Right Here' was released in 2006. Young love and dreams were all grown up and unfolding before the world. The freshman album is a collection of thoughts and dreams captured in musical form that transcends different musical genres; it expresses deep connections with different people and places. In November 2006, that musical connection was recognized to the fullest when Amiena walked away from the LA Music Awards with R&B Album of the Year and Nu-Jazz Vocalist of the Year for the song 'Fourth Floor'. It was a night of dreams realized but it was only the beginning for Amiena. Since the release of 'Right Here', Amiena has been performing regularly in the Los Angeles area and abroad. Internationally, she has found herself in high demand performing in Lebanon, Syria, Greece, Switzerland, Italy, London, Dubai, Prague and Bahrain; and that was just 2007! In 2008, Amiena resumed travel abroad performing in Milan, London, Wales, Dublin, Frankfurt, Switzerland, and, Como. She possesses enough passport stamps to rival even the most popular diplomat and has seen enough oceans to make anyone longing for a tropical vacation envious. Currently, Amiena is working on a Sophomore CD. She's dedicating the majority of her time to recording, performing and writing. Her love and respect of the classics continues to influence her sound while the new sounds of pop and R&B round out her style creating the simplest way to describe her voice and overall talent - perfection! Her performance schedule keeps her calendar full and continues to allow her to share her first love, her music, with more people around the world.

Here's what you say about
Amiena - Right Here.