Jeff Wenberg - Right from the Start 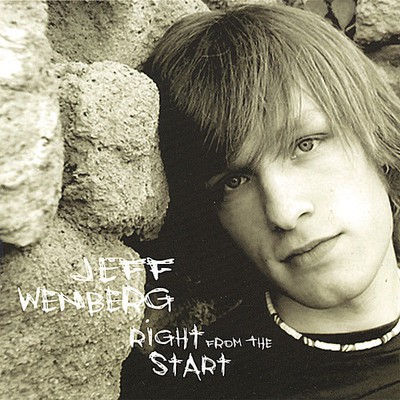 "Right from the Start" sums up exactly what Jeff Wenberg accomplishes with his new CD. As the first notes play, you know it's "Right from the Start" and as the songs progress, you realize that, not only is it right from the start, but right in the middle and right at the end. The album is simply a captivating story of finding love and losing love "Right from the Start." Jeff Wenberg got his musical start well before he was even big enough to hold a guitar. In Sioux City, IA, Jeff discovered his inner Elvis through his earliest musical memories like, Jailhouse Rock, King Creole, Viva Las Vegas, and Blue Hawaii. And when he wasn't trying to record Elvis songs off the television set with his handheld tape recorder, he was letting his dad lead the way into the world of The Beatles, The Rolling Stones, and The Beach Boys. Jeff recalls numerous road trips, back in the day, where his parents loaded up the front seat with tapes and he and his brother listened and dreamed of the days when their own music would be played on the radio. When Jeff got his first guitar around the age of 8, he still thought himself to be a young Elvis. It wasn't until he witnessed some of his first live performances that he realized the life of "Musician" might be his calling. At 13, Jeff saw a young, unknown Jonny Lang, 14, perform live in his hometown and immediately thought, "Whoa! This is exactly what I want to be doing." So he buckled down and resigned himself to music. Jeff, and his brother Mark, got their chance to be musicians when they decided to form a band. Calling themselves The Breakaways, the boys played extensively throughout Iowa, Nebraska, and South Dakota. Some of their proudest moments came when they shared the stage with such acts as: The Lovin' Spoonful, Big Head Todd & The Monsters, Shannon Curfman, and The Hadden Sayers Band. After medium-sized Sioux City had given all it could for Jeff and The Breakaways, he was desperate to move on to larger venues, more screaming fans, and a new place to call home. Minneapolis became the big new ocean that Jeff had to swim through, and the current tried to catch him in the undertow. Jeff struggled to find the right combination of musicians and producers to complement his unique style and the task proved difficult at times. But Jeff has always been a fighter and never once let the big waves of the Twin Cities scare him off. To entice his creativity even further, a chance encounter with legendary songwriter/keyboardist Bruce McCabe (Jonny Lang, The Hoopsnakes) motivated Jeff to continue his pursuits. After a persistent year of mild pestering, Bruce gave in and the two formed a new collaborative relationship, writing new songs and improving on old ones. As Jeff entered the recording studio, Bruce was able to offer his invaluable advice as well as his invaluable keyboard services and Jeff's dynamic sound was made whole. It's been 2 years in the making and finally Jeff's first CD, "Right from the Start" is complete. He teamed with producer Dik Shopteau (Kevin Bowe, Shane Henry, Renee Austin) and found his voice. This voice channels the artists of his past while adding his own modern flair. Jeff says, "this process seemed unending, but, with Dik's help and expertise, we fine-tuned my songwriting skills to produce something I think will really stand out." Along with Dik on bass and Bruce on keys, Jeff utilized local talents Alex Rossi (Root City Band), Paul Mayasich (The Benderheads), Matt Zubrzycki (Amour, Mutt), and Noah Levy (Five for Fighting, The BoDeans, The Honeydogs) to amplify the intensity of the production. In addition to the CD full of eclectic musicians, Jeff has formed a great live band that he feels can go the distance. With this new formula of ear-catching music, compelling CD, and awesome musicians, Jeff Wenberg is ready to take the music scene by the rock 'n roll horns and rock the socks off of anyone willing to jump on for the ride! Biography by Abbie Bauman.

Here's what you say about
Jeff Wenberg - Right from the Start.