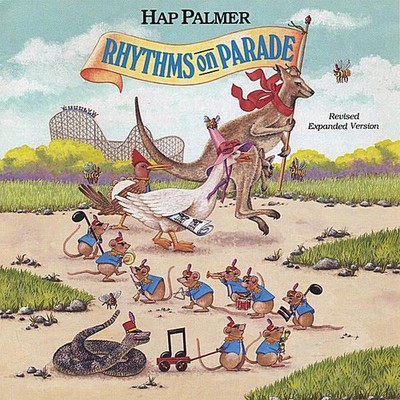 Review Parent's Choice Honors Award RHYTHMS ON PARADE! Hap Palmer. Hap-Pal Music, HP102E Cassette $9.95, CD $12.95. Ages 3-8 Hap Palmer, the dean of movement songs and rhyming rhythms presents an expanded version of his clever, action-packed album.  Stimulating both imagination and movement, these 24 original songs are packed with kid-pleasing commands - 'The mice go marching quietly by, Shh! Shh! ....The mighty monster marches by, Kaboom! Kaboom!.... Beat a drum, click your tongue...'  Palmer also encourages tapping, shaking, ringing and clapping in songs such as Switch on the Music, and Bean Bag Shake. Homemade Band includes simple instrument-making instructions, and each song comes with suggestions for alternative play. Parent's Choice Honors Parent's Choice Vol 19, No. 2 1995 About the Author Hap Palmer is an innovator in the use of music and movement to teach basic skills and encourage the use of imagination and creativity. He has been referred to by Parents' Choice as the dean of children's music. For over twenty years his recordings have been widely used in schools and day care centers. His songs have also been used in the popular Baby Songs video series. A songwriter, musician, singer, dancer and educator, he conducts workshops and presents concerts throughout the nation. He has taught courses for various education extension programs, participated in the Friends of the School Volunteer Program for the Los Angeles Unified School District and taught classes in creative movement for children, physical fitness, and tap dance. He has also performed with the UCLA Dance Company, and the Pierce College Dance Theater. His educational background includes an M.A. in Dance Education from the University of California at Los Angeles. His recordings and videos have received numerous honors including the Parents' Choice Award, the American Library Association Notable Recording designation, the American Library Association Best of the Best for Children, the National Parenting Publications Award, and the American Video Award. Description Twenty four lively songs introduce the joy of rhythm with the revised expanded version of this popular recording. Children explore basic musical concepts as they move and sing. While developing musical skills, they also improve skills in language, math, fine and gross motor co-ordination and auditory discrimination. In addition, these songs contain a variety of playful images which stimulate children's creative and imaginative powers. For extra fun, children can use rhythm instruments such as wood blocks, sticks, bells, tambourines, and maracas. The extraordinarily flexible nature of this recording makes it an effective tool which parents and teachers can use in almost any situation. Changes in tempo are illustrated by a rollicking ROLLER COASTER ride and the high spirited party song SWITCH ON THE MUSIC. Children learn about note value and meter by WALKING NOTES to a swing jazz rhythm, playing FIVE BEATS TO EACH MEASURE, or counting beats and pauses as they PLAY AND REST. Children are encouraged to recognize and repeat simple rhythmic patterns with the cheerful strains of TAP YOUR STICKS, the classic verses of MOTHER GOOSE HAS RHYTHMICAL RHYMES, and the down home beat of the BEAN BAG SHAKE. Children can create their own patterns as they play along with the joyful sounds of KRIS KRINGLE'S JINGLE BELL BAND, RHYTHMS ON PARADE, and the Latin rhythms of STICK DANCE. As children's awareness of rhythm is heightened they learn to recognize the patterns in the ticking of a clock, the wailing of a siren, the crashing of ocean waves and other SOUNDS AROUND THE WORLD. A colorful assortment of animals help children explore key concepts. The fearless MICE GO MARCHING up a giant monster to emphasize changes in volume. Snails, turtles, rabbits and cheetahs reinforce the concept of SLOW AND FAST. The WOODPECKER taps out rhythmic patterns and the magical JINGLE BELL BEES explore shaking and vibrating motions. Horses, cows, rattlesnakes, and cats invite children to sing and play with OLD MAC DONALD'S BAND. Gophers, eagles, spiders, flies, a puppy and a bouncing kangaroo encourage children to explore space while SPREADING RHYTHM. Animals, the alphabet, and phonics combine in CHOOSE AN INSTRUMENT making a fun way to pass out rhythm instruments. (If you don't want to buy instruments, the songs HOMEMADE BAND and I'M A LITTLE WOODBLOCK tell you how to make them! ) A signal which tells children when to stop playing is introduced with a bluegrass beat in COUNTRY CLASSICS STOP AND START. Children also play rhythm instruments to make the sound of falling junk in a story about a silly family who's only way to clean house is to STUFF IT IN THE CLOSET. A guide with song lyrics and activities is included.

Here's what you say about
Hap Palmer - Rhythms on Parade.