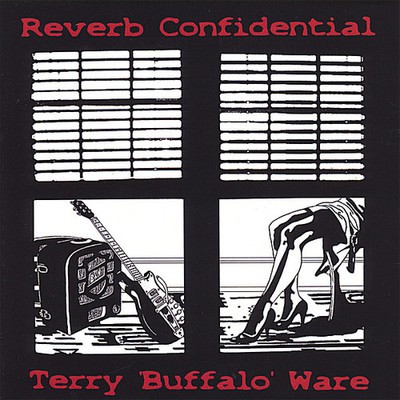 Guitar driven, reverb drenched instrumentals. Brand new release from Terry 'Buffalo' Ware. Recorded in Norman, Oklahoma this is Ware's third solo release. In addition to Ware, the album features many of Oklahoma's top musicians as well as top notch players from New Mexico, Arkansas, Washington and Texas. Contains seven original tunes, including a co-write with Clovis Robaline of The Plungers and covers of songs written by Harry Nilsson, Harlow Wilcox and Bobby Warren, Fred Krc and Cam King, Susan Hyde-Holmes and also Emily Kaitz. Reviews--- Maybe it's because he's from Oklahoma, but the all-instrumental Reverb Confidential by Terry 'Buffalo' Ware has a desolate, dark quality at times, reminiscent of John Blakely's 'surf noir' Tan Mantis. The majestic opener, 'Bob, Meet Buster,' recalls instrumentals by similarly land-locked Mississippians Webb Wilder and R.S. Field, while the Southwestern element is reinforced by the presence of Austinites-by-way-of-Oklahoma Dennis Meehan and Clovis Roblaine of the Plungers, on guitar and bass, respectively, and Susan Hyde-Holmes of Santa Fe's Milo De Venus (who plays bass on several cuts and penned the beautiful 'Sleepy August Moon'). Another Austin connection pops up in songs by Emily Kaitz ('Sand Dune') and 'Dangerous Dana' by the Explosives' Freddie Krc and Cam King. The mood definitely brightens on a cover of Harlow Wilcox's 'Groovy Grubworm,' with Ware and Bob French trading solos over a 'Memphis' groove. Songs like 'Our Man 008' prove our man Buffalo to be a contemporary instrumental rocker - like old schoolers Blakely and Paul Johnson and neo-surfers Laika & The Cosmonauts and The Plungers - capable of bringing the genre into the new millennium. As with the others, great guitar chops is a given; the secret is solid, melodic compositions exhibiting big, eclectic ears. --Dan Forte, Check This Action, Vintage Guitar Jan. 2008 Very welcome return for the excellent Oklahoma guitarist Terry after his previously well received two earlier albums. Have to say this is excellent and will appeal to any guitar fans out there. Modern yet Ventures tinged; clean and with reverb; decent melodies on a mainly original set. 'Sand Dune' is a lovely track with a bit of Duane sound floating in there and 'Sleepy August Moon' is just gorgeous - almost cajun. 'Sleepwalking Talk' is a tribute to Santo & Johnny and fun it is too. The 'Memphis'- like 'Groovy Grubworm' gets a great treatment - better than the 1969 original we say. This is a cracking set to start NGD and with the production playing and arrangements being very decent, indeed, highly recommended. **** --Davy Peckett, The New Gandy Dancer, Sept. 2007 Guitarist Terry Buffalo Ware's main bag is traditional surf rock. But every now and then, he trims his instrumentals with some fancy accessories, which needless to say, adds a little something extra to the affair. The waltzing hum of an accordion can be heard on both 'Sand Dune' and 'Sleepy August Moon,' while a chorus of handclaps surfaces on 'Our Man 008.' Terry's chops are efficient, his pitch is clean and he has a flair for creating snappy hooks. Jingly tambourines and chugging keyboards are also continually utilized throughout 'Reverb Confidential.' Further highlights included on the album are 'Bob Meet Buster' and 'Sleepwalking Talk (Homage to Santo and Johnny and Ann Farina),' which flicker and flow with space and emotion. Warm, sunny and rocking with life, 'Reverb Confidential' demonstrates Terry's talent for writing and performing instrumental music to great effects. --Beverly Patterson, The Lance Monthly, Oct. 2007.

Here's what you say about
Terry Buffalo Ware - Reverb Confidential.