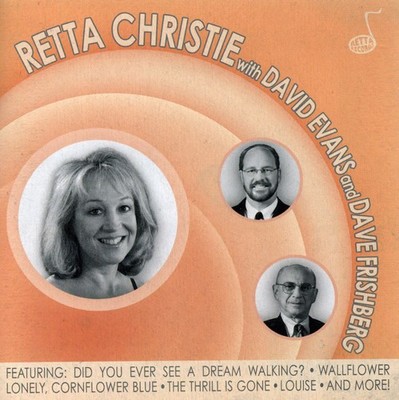 RETTA CHRISTIE with DAVID EVANS and DAVE FRISHBERG Retta's music is refreshingly unintimidated by musical border guards. She draws comfortably on country music, with all it's geographical and stylistic tributaries, as well as swing, pop, vintage jazz, novelty and the Great American Songbook. Richard Hadlock, Host & Producer, the Annals of Jazz, KCSM-FM, San Mateo, California "Retta Christie has a singular knack for that curious, vastly entertaining form of Americana that swings in the recesses between jazz and country. Think Jimmie Rodgers, dustbowl prophets like Cowboy Bob Wills or Floyd Tillman, or the flatland plains poetry of Hoagy Carmichael, and you're in the neighborhood. Fans of Irving Berlin saloon songs will be swinging till the cows come home. Secret weapons: Dave Evans on sax/clarinet and the hip avuncularity of Dave Frishberg at the keys." Tim Duroche, Willamette Week Retta Christie was an Oregon farm kid who learned to square dance and to accompany family members and her own singing with her guitar. She loves bristling Western swing, good Dixieland, cowboy movie music and clever song-stories by composers such as Floyd Tillman and Dave Frishberg. This is not eclecticism for it's own sake-Retta has heartfelt reactions to a variety of songs and singers and she expresses those feelings by telling-singing-each story her own way. David Evans began playing sax and clarinet around Alabama in his 'teens. He moved to New Orleans and wound up playing with everybody in the Crescent City. His resume contains names such as Nicholas Payton, Pete Fountain, B. B. King and recording artists reflecting every facet of popular music. Dave Frishberg is held in high esteem around the world as composer, lyricist, pianist and singer. Happily for Retta, and for us, he also enjoys the less conspicuous role of piano-playing sideman and accompanist. His star-studded gig history includes Al Cohn, Bobby Hackett, Ben Webster, Irene Kral, Anita O'Day and Jimmy Rushing. You won't hear Dave sing here, but you will hear Frishberg the songster at work in the sensitive touches he employs to back Retta's vocal work. TRACK LISTING 1. Cheatin' on Me 2. Yearning Just for You 3. Did You Ever See a Dream Walking? 4. Wallflower Lonely, Cornflower Blue 5. Someday (You'll Want Me to Want You) 6. The Thrill is Gone 7. Louise 8. I'll String Along with You 9. On Treasure Island 10. This Cold War with You 11. Lost 12. Ridin' Down the Canyon Reviews Spinning Retta Christie's new album, a collaboration with veteran pianist Dave Frishberg and saxophonist David Evans, is like taking a leisurely stroll back in time. In their capable hands, these vintage gems sparkle anew -rollicking in a jaunty jazz vein or detouring through idyllic western plains. Christie's calm, clear voice is a throwback to simpler times, and the pristine musicianship that surrounds it is effervescent. If you miss the golden age of song, you won't want to miss this record. - Barbara Mitchell, The Portland Tribune ...Retta's perfect diction is made apparent. A singer with great technique, she never sounds as if she is "slumming it" by singing music which does not demand blatant virtuosity in it's execution. The songs, mostly culled from the 1920's and 1930's incorporate to varying degrees, elements of country swing, (hot) jazz and saloon songs. Each song utilizes elements from these genres - For me, part of the appeal of this album is that it transcends standing firmly in one genre. ...all three artists convey a great authenticity for the music. - Maxwell Chandler, Jazz Police There is something absolutely charming about Christie's straightforward, sweet delivery...her style is simple and melodic. Christie loves a good melody and a jaunty beat, especially those from the early days of jazz and western swing. - Kyle O'Brien, Jazz Society of Oregon.