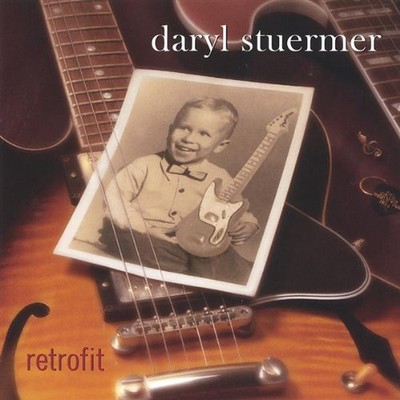 Review from 'The Jazz Nation' - Retrofit From his early fusion days with Jean Luc Ponty to the most recent world tour with Phil Collins, Daryl Stuermer has proven himself a guitarist, composer, producer and musician's musician. Retrofit, is his 5th solo project (4th on the Urban Island Music label) and not a retrospective per se, it is instead a gathering of the musical experiences garnered along the way. Forging 9 original compositions, he celebrates his maturity as an artist, yet reveals the youthful energy harnessed from going back to where it all began. His 2003 release Sweetbottom Live: The Reunion Recording, was the catalyst and Retrofit, is the result. Joining Stuermer is a solid group of musicians: Kostia (acoustic/electric piano), Eric Hervey (bass) and John Calarco (drums/percussion) and they begin with two tracks that strike immediate contrasts. Revealing quite an eclectic range Stuermer's title track riffs electrified rock roots and the beguiling follow-up tune Rendezvous makes you understand, with it's bluesy feel, that Stuermer is fluent in several guitar languages! An engaging quality transcends the ballad Promises as the octaves are played in Wes Montgomery style and not only does Stuermer promise, but he delivers as well! He takes the Wes-feeling further with melodic chord variations all the way to Zanzibar! Stuermer's signature sound gets decidedly edgier on the tracks Vagabond Street, Sharkskin Suit and Midnight Traveler as he tells these progressive stories. The song I Will Remember You is performed beautifully on the nylon string guitar and the intriguing percussion lines make it an experience you won't soon forget! As you dive further into Stuermer's album Retrofit, it's not surprising to learn of his extensive work with the supergroup Genesis and the longstanding association with legendary recording artist Phil Collins. Their collaborations include I Don't Wanna Know, Doesn't Anybody Stay Together Anymore, Only You and I Know, as well as the ASCAP-award winning song Something Happened on the Way to Heaven. The most recent arrangement of the song The Least You Can Do appears on Retrofit. Originally composed by Stuermer in 1993, lyrics were later penned by Collins and the vocal version was recorded on Collins' album Testify. They say you can't go home again, but Daryl Stuermer not only takes us there, he brings us on a tour of his musical experiences and in the process creates something new. He arpeggiates the chords, rocks the rhythms and more than notes, he's captured the spirit. Musically speaking, Daryl Stuermer has put the pieces together and Retrofit is indeed greater than the sum of it's parts! D.J. Fazio.

Here's what you say about
Daryl Stuermer - Retrofit.