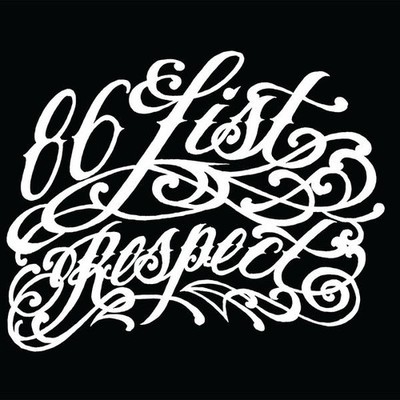 Coming from an island in the middle of the Pacific, one may not expect fast driving punk rock music with anthemic choruses and lyrics of struggle and political criticism, but this is Hawaii's own, The 86 List; a band born in the dark side of paradise, Honolulu punk rock scene. Raised in Hawaii, these three members have been playing music side by side for the more than ten years. Surrounded by a strong military presence has forced The 86 List to look beyond the palm trees to the root of this overwhelming occupation of a once sovereign nation. Throughout their 5 albums, the band has taken many stances on issues ranging from police brutality, the Asian Development Bank, and overpopulation, to the militarization of the Hawaiian Islands and the Hawaii Civil Unions bill. Forming in 1999, 86 List played their first show in 2000, while Josh86 and Derek86 were still in highschool. '86 list' refers to a list in a coffee shop where Josh86 worked on the North Shore while he was in high school. It was a list of things missing from the shop's inventory, and alludes to the 86 List's songs' lyrical content, which concerns things that are missing or should be missing from society. For the last decade the band has been a committed to the raw politicism that can be found in the bands that have most influenced them, such as The Clash, Bad Religion, and Operation Ivy. "Disaster", the bands first CD, was released in 2001. It has been followed by "Our Neighborhood" (2003), "Tattoo" (2004), "86" (2007) and "Respect" (2010). Over the years The 86 List can be credited with some of Honolulu's most memorable musical moments. Otto and the band have put on multiple productions of Hedwig and the Angry Inch. Josh86 has worked tirelessly as a promoter and front man of both The 86 List his other band, Black Square, to support the live music scene. In 2009 Josh86 also released a solo record "Pressure." On the current album, "Respect", singer and song writer Josh86 takes a slightly personal turn as he reflects on growing older in a changing scene (Taken), the results of life changing mistakes (Choices), broken friendships (Neva Get it Right), and the endless struggle of surviving as an artist in Honolulu (Into the Night.) "Respect" also captures the earlier albums political focus with songs like "Red Tide", a criticism of Hawaii's homophobic Christian population and "Like Rome" which lists the atrocities in America's history and it's likely demise similar to Rome. The songs come quick and hit hard with no fat to cut. The title "Respect" for the album seems to fit appropriately as the once teenage punk group has fully matured into it's own blood filled machine manufacturing honest music that demands nothing more than respect. The work on this album is a true summation of the career of The 86 List, Hawaii's own punk rock band that's here to stay.