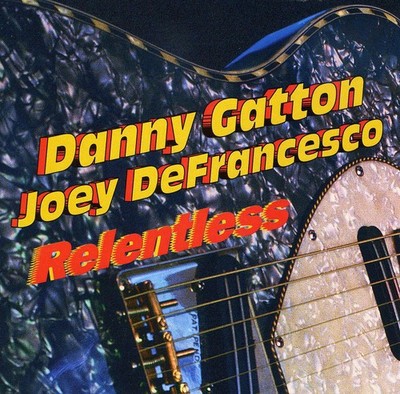 DANNY GATTON/JOEY DeFRANCESCO RELENTLESS BIG MO 20232 The guitar wizardry of DANNY GATTON and the Harmnond B-3 virtuosity of JOEY DeFRANCESCO join together to create the musical tour de force Relentless on Big Mo Records. From the jazz classics (Count Basie's 'Broadway', Wayne Shorter's 'The Chess Players', Thelonious Monk's 'Well, You Needn't') to the DANNY GATTON-penned originals, the two improvisational giants push each others musical boundaries, cre- ating an exhilarating, flat out, no-holds-barred, soul-drenched musical expedition. Guitarist DANNY GATTON has been a local guitar legend in his native Washington, D.C.-area since the early '70s. 'A lot of people think DANNY GATTON is the best guitar player alive', declared the Washington Post. A student of vintage American music, GATTON has always been hard to pigeon-hole, blending jazz, country, blues and rock. He toured briefly with country legend Roger Miller and rockabilly great Robert Gordon. He was part of an all-star jazz ensemble CD, New York Stories for Blue Note Records. He appears on Chris Isaac's release San Francisco Days. In 1991 GATTON gained long-overdue national attention with the release of his Grammy-nominated Elektra debut 88 Elmira Street. 'Gatton is a do-anything guitarist who can wail in any style' (Billboar~). 'God Himself rnight well be impressed by Danny Gatton' (Esquire). He and his band played a series of international music festivals including the Montreux Jazz Festival, appeared on the David Letterman Show, Austin City Lirnits and MTV Live and was pronounced '1991 Face to Watch' by Entertainment Weekly. In 1993 he released Cruisin' Deuces, his sophomore release for Elektra. JOEY DeFRANCESCO, at the tender age of 23, has already made quite a name for himself on the international jazz scene. He was signed to Columbia Records in 1988, while still in his teens, and has subsequently released five albums for the label. He toured Europe with Miles Davis' band and plays keyboards on the track Cobra on Mile's Amandla album. He's appeared on the 'Today Show', 'CBS This Morning' and 'Entertainment Tonight'. DeFRANCESCO 'plays the B-3 with the kind of f1re and sea- soned touch that belies his...years' (Jazziz). 'His voicings, solo lines and singing comps...echo the masters oi jazz organ' (Keyboard). The union of these two extraordinary talents 'was as natural as daybreak' (Frank-John Bradley, Downbeat/Jaz2iz). From GATTON's fleet-fingered guitar work to DeFRANCESCO's soul-stirring Hammond B-3 stylings, it is an instant meeting of the minds. The result is one of the most exciting and vibrant musical pairings since Billie Holiday and Lester Young. With the help of long-time GATTON associate John Previti on bass and Timm Biery on drums, Relentless is unyielding in it's musical power.

Here's what you say about
Danny Gatton - Relentless.