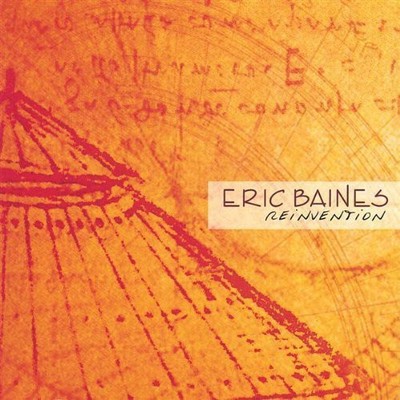 Reinvention, the latest release from Eric Baines, is his most honest work to date. A complete and total departure from his earlier recordings, it marks the first time he's played guitar on a record, and used the guitar, as opposed to the keyboard, as his primary writing instrument. Baines explains, 'Most of these tunes came out of an honest exploration of myself and a search for the true me. I tried to stay true to that and write songs that I enjoy listening to and enjoy playing.' Baines called on his closest friends and colleagues (many of whom helped inspire the writing of the record) to play his music and bring it to life in the studio. The album features Gary Patrick, Gene Siegel, and Bobby Williams on guitar, Fred Mandel and Noriko Olling on keyboards and Chad Wright on drums. There are also two tracks co-written with Baines' writing partner, Kim Wimmer. The entire album was conceived and written on the road and in hotels all over the world from Europe to Japan and all over the U.S...even recording and mixing some of the tracks in hotel rooms in Las Vegas, NV. The concept of 'baggage' that recurs throughout the record has multiple layers of meaning. HISTORY Eric Baines has been playing guitar since he was 7 years old. It was the first instrument that he ever picked up. His dad gave him lessons and young Eric played and sang songs from the family's collection of fake books that were filled with songs from the Beatles, the Stones and all kinds of rock from the 60s. It was a great way to learn and inspired him to begin writing his own songs early-on. He then began playing piano, trumpet and percussion. A gifted drummer and natural teacher, he taught marching percussion for his former high school for 9 years. Another instrument he had picked up was the bass guitar which would become his primary instrument and means of making a living for years to come. Baines went to Berklee College of Music as a bass player and vocalist. The lure of paying gigs was strong, however, and he left Berklee after three semesters to begin working as a professional musician. He started his own band called 'The Fringe' which enjoyed moderate success, releasing a CD, playing on T.V. and radio, and touring the country. Baines then joined a blues band in Denver and began working as a sideman playing bass and singing. After a few years of this he signed on for a gig with contemporary jazz saxophone player Nelson Rangell which started his career in smooth jazz and R&B. After a few years of playing with Nelson, honing his bass playing skills and singing, he finally made the move to swim with the big fish in LA. He quickly found himself playing with the likes of Keiko Matsui, Gregg Karukas, Lee Ritenour and many other great musicians and artists but still didn't feel like he was quite on track. He offers, 'I wasn't completely satisfied musically. I was traveling the world and making money but still missing something.' He then met guitar player Gary Patrick who had a cover band called Clockwork. Though Baines was definitely not interested in being in a cover band, the gigs paid well so he picked up a few for the extra cash. He really clicked with the other band members and they began playing a regular gig in Vegas at the Mirage Hotel. After years of playing smooth jazz and R&B, he was suddenly exposed to a world of new music. Clockwork's singer, Kim Wimmer, introduced him to the likes of Coldplay, John Mayer, Duncan Sheik, and Radio Head . To his surprise, all of this music spoke to him in a way that nothing else had and reminded him of the guitar player that he once wanted to be and the rock music that he once loved. So he bought an acoustic guitar and started writing and collaborating with Kim. Eight months later, Reinvention was complete. THE ALBUM Reinvention is a powerful journey of self-discovery...from resistance to acceptance and intention to rebirth. The songs 'Reinvention', 'Something More', 'Baggage', 'On the Inside' and 'I'm Coming Around' delve into the idea that we all have our own challenges and pain but there's a moment of realization that this life is yours to be whomever you intend to be and it's too short to spend it pretending to be somebody you're not. 'When it's Over' is that inevitable dark moment you experience right before the great aha! Baines really explores the dance of relationships on 'The Lucky One', and 'I Know the Day will Come'. And finally, there's the amazing phenomenon that happens to us when we get beyond ourselves enough to see the mystery and beauty in the flaws and perfection of others. 'Like I See You' and 'The Light' chronicle that experience. Reinvention shines a light on what it means to be human and in process. It honors the journey of the active traveler and suggests that there's great power in intention...that we're all powerful creators.

Here's what you say about
Eric Baines - Reinvention.