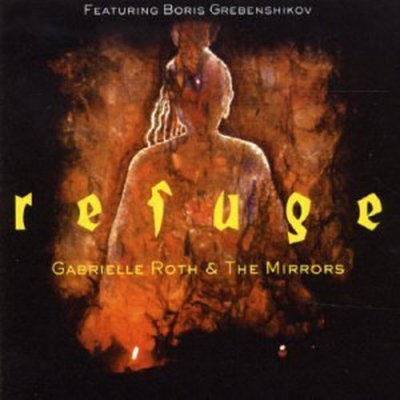 Take world-beat percussion and the music of Gabrielle Roth & The Mirrors; Add Tibetan Buddhist chants sung by legendary Russian rocker, Boris Grebenshikov ... Seek REFUGE. Perfect for spiritual meditation, massage, sacred dance and pure listening enjoyment, the ravishing ecstasy of this magical music will make your Buddha soul smile. For her tenth album with Gabrielle Roth & The Mirrors, Gabrielle has rounded up a bevy of world-class musicians including Boris (known as 'Russia's Lennon' for his position as that country's top underground pop performer) for this deeply profound, moving album that gets richer with every listening. Throughout this transcendant yet intimate recording, a delicious combination of rolling percussion, spicy ethnic instrumental accents, and dramatic pauses meld with Boris' deeply resonant chanting to express the exalted yearning of a displace culture. Headphones are highly recommended to more fully enjoy the pure sounds of Taos drums, alto flute, viola, talking drum, trumpet, cello, atoke bell, congas, keyboards, rain stick and other instruments. All of the royalties from this album are being donated to varous Tibetan causes. This is the first album from the collaboration that produced the extraordinary album, BARDO. As one critic noted, Gabrielle Roth is the only woman in America making tribal, ambient music and she's been doing it for 20 years. Boris Grebenshikov is the former USSR's leading rock musician. He has released 20+ solo albums and 30+ albums with his band, Aquarium. There are over 300 websites devoted to his music.

Here's what you say about
Gabrielle Roth & Mirrors - Refuge.