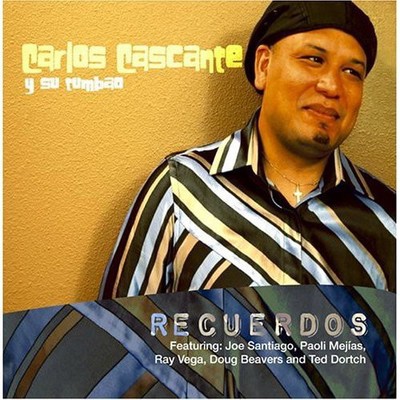 --- The Seattle-based Latin ensemble Tumbao with leader/vocalist Carlos Cascante, releases their first CD entitled 'Recuerdos.' The six-piece band is known in the Pacific Northwest for their joyful and energetic performances. A unique combination of musicians allows Tumbao to combine traditional-style Salsa with modern Timba and Latin jazz. 'Recuerdos' blends the best of those musical worlds in a compelling, new and clean fashion. 'Recuerdos' or memories, consists of 12 songs, eight of which are original compositions. The songs range from Salsa to Chacha, Son Montuno to Bolero. The song, 'Mi Tumbao' introduces the band - 'here comes Tumbao'. 'Tomasito' talks about Tumbao's trumpet player Thomas Marriott. The title track 'Recuerdos' takes the listener to the village of Ortega in Costa Rica where Carlos Cascante grew up. 'Robertica' is dedicated to Bobbie, pianist Julio Jauregui's fiancée. In addition to the new songs, Tumbao also honors the classics with 'Obsesión', 'Al Vaivén de Mi Carreta', 'Harina de Maiz' and 'Bilongo'. 'Recuerdos' features several celebrated guests in the recording, amongst them Ray Vega (trumpet) and Ted Dortch (saxophone). Paoli Mejias (congas), whose current album 'Mi Tambor' is nominated for a Grammy for best Latin Jazz Record, plays the intro and the song 'El Tambor' - the drum. Joe Santiago (bass) and Doug Beavers (trombone), who are members of Eddie Palmieri's band, are also featured on several songs. 'Recuerdos' was recorded at Bettermusik studio in Puyallup, WA under the direction of Julio Jáuregui. The artists who make up Tumbao are Julio Jauregui (piano), Dean Schmidt (bass), Thomas Marriott (trumpet), Jeff Busch (drums), Pedro Vargas (congas) and Carlos Cascante (vocal). Julio Jauregui started his music education at a very early age in Mexico City and completed a degree in music at the University of Oregon in Eugene, OR. Julio was responsible for all the arrangements on 'Recuerdos' and is the musical director of Tumbao . Julio is a very well known latin piano player in the West Coast who incorporates Jazz as his vehicle for writing and performing. Dean Schmitt and Jeff Busch, both from Washington, are well-versed in a variety of music styles, including Jazz, Blues, Gospel, Samba, Calypso and Rock. This provides the band a wealth of musical options. Jeff Busch was also the percussionist on Jovino Santos Neto's album 'Canto do Rio' which was nominated for a Latin Grammy in 2004. Pedro Vargas, the newest band member, grew up in Cuba and brings a rich Cuban influence to Tumbao. Pedro has toured the World and played with many great traditional Cuban artists, such as the stars of Buena Vista Social Club, Los Van Van, Sierra Maestra, etc. Thomas Marriott is a well known Jazz trumpet player who has already recorded four of his own CD's. He has also played with an impressive roster of jazz luminaries including trumpet god Maynard Ferguson, Rosemary Clooney, the Tito Puente Orchestra, and the Chico O'Farill Orchestra. Carlos Cascante leads the group with his deep love for the music. His large knowledge of all types of Latin rhythms combined with his creative improvisational talent make him one of the up-and-coming Soneros in the Latin scene. The music and performance of Tumbao ignites the audiences and inspires them to dance.

Here's what you say about
Carlos Cascante - Recuerdos.