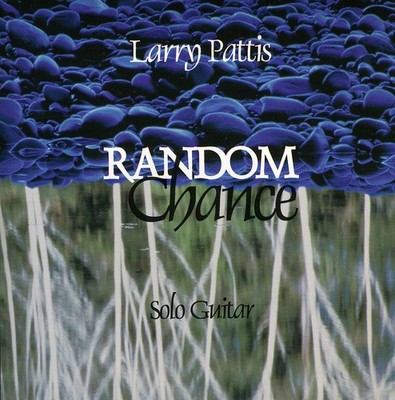 In listening to his superb recordings, or experiencing the magic of a live concert, Larry Pattis succeeds in merging styles of instrumental guitar music not normally found in the same room together. Both Folk and Classical styles seem to be fully represented within Larry's playing and compositions. While devoted to the emotive side of the instrument, Larry demonstrates considerable technical prowess. His musical vision is a blending of beauty with technique, to bring forth the many voices that the steel string guitar can manifest. Like that of classical guitar masters, Pattis' music is filled with strong melodic content and rich harmonic counterpoint, supported by moving, evocative rhythms. Fingerstyle Guitar Magazine has said of Larry Pattis' first CD, '...Random Chance has us standing up and taking notes. Pattis is a gifted writer and acoustic guitarist. The mostly original works range from exquisite ballads that bring to mind Ed Gerhard and El McMeen, to up-tempo compositions that roll from his fingers with hints of early Pierre Bensusan.' When Larry released his debut album, 'Random Chance,' Pierre Bensusan said, 'We can almost imagine him sitting there contemplating the landscape that he loves and, as we listen, we sit beside him and share this special moment. Each tune is like a private conversation, an invitation to an attractive garden of his. No doubt that his future musical wanderings will be like a morning jog in a field of virgin snow.' The Salt Lake City Weekly wrote, 'Pattis approaches every note with the ethics of a perfectionist, but without sacrificing the passionate center his compositions inhabit. You may find yourself wondering if guitar music has ever sounded this good.' William Athey of the Event wrote, 'To say that Larry Pattis' first CD, Random Chance, is exquisite would be an understatement. What we have here is a joy, a work of art existing in an environment of music as 'product.' An artist should project warmth, an artist should be creative, an artist should produce some sort of emotion besides boredom...individuals such as Pattis don't promise a thing. They deliver. If music can heal, Pattis created the medicine.' Larry Pattis was born and raised in suburban Chicago. Along the way, Larry has been a gymnastics coach, delicatessen manager, concert producer, acoustic guitar store owner, and even spent a year in medical school at the age of 35. Recently re-settled outside of Eugene, Oregon, Larry has toured all across the United States.

Here's what you say about
Larry Pattis - Random Chance.