Maury Merkin - Ramblings of the Morning Following a Sleepless Nig 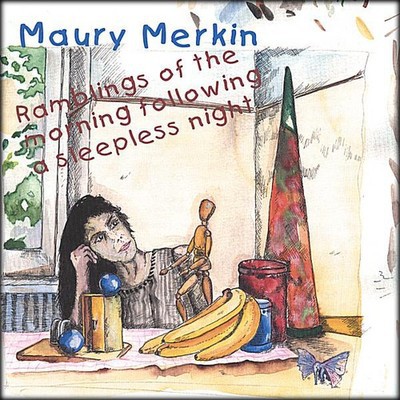 First the bad news: Maury Merkin can't sing a lick. He rarely performs live but in person, seated at the piano wearing no socks and with his legs crossed, he oddly pulls it off through a certain amount of directness and, well, maybe charm, and it's likely that folks who have seen the act recall some of this and that's what they were looking for in his recordings. But for the rest of you there's no getting around it: Maury can't sing a lick. Also, you have to be prepared, if you're gonna listen to his CD 'Ramblings of the morning following a sleepless night,' to wade through seven of his poems. They're not hip. They're not even good poetry. But there they are, taking up seven of the first thirteen tracks, daring you to spend more time than it's worth to program your CD player to skip them and play only the songs. Then, as if to underscore just what a lousy singer he is, Maury has included two tracks with songs of his which are sung by Rock Tipton, an exceptionally gifted singer. And the question is, why? I mean, would you allow photos of Julia Roberts and Jennifer Lopez to flank yours? But there is good stuff here. A lot of it. First of all there's Maury's lyrics. They're first rate. They're moving and they're whimsical. They paint pictures your eye will clearly see and they tell stories that you're glad you heard. The music may not, on the whole, be great music, but it's serviceable and sets his lyrics nicely. And aside from that it's performed well. All of it. But especially Rock Tipton's guitar on the two tracks on which he sings (most magically on 'A Christmas Song'), Rick Schmidt's fiddle on 'Appalachian Rain' and Vince McCool's flugelhorn which wanders in and out perfectly on 'Spring Smells Funny.' Also, this CD is very well engineered by Michael Setton at Blue House Productions in Silver Spring, Maryland. That can be heard throughout. Another surprise is that, poems and all, the program flows nicely. The songs are written and performed in an odd melange of styles ('Appalachian Rain' has a nearly blue grass feel, 'Spring Smells Funny,' with it's children's chorus, sounds like something from a PBS afternoon show, 'A Christmas Song' is definitely jazz inspired and the other three songs, all ballads, are kind of old-fashioned pop) but as one listens from beginning to end there's the sense that there's some rightness about it all. Oh! And I nearly forgot the illustrations. The ones that adorn the 'insert' - that little booklet whose cover shows through the front of the jewel case. They're by Uwe Bressem, a wonderful artist from Berlin, and were created expressly to accompany this CD. They are worth the price of the CD. (My personal favorite is the delightful sketch of the beetle climbing up the stem to 'turn the lilac on' which illustrates a line of the lyric of 'Spring Smells Funny.' But all of them are lovely.) If I sound like I enjoy it that's because I do. In spite of the voice which, after a while I kinda got acclimated to, it's a very fine effort. If it's Maury's first your not really surprised to find he's been a performer for most of his life and that that's been for several decades now. If you enjoy vocal music buy it and listen. It may give you hours of pleasure.

Here's what you say about
Maury Merkin - Ramblings of the Morning Following a Sleepless Nig.