Robin Blair - Rainbow in My Heart 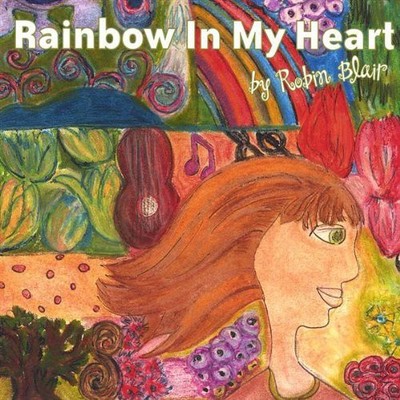 SUPER NOVEMBER SALE ON AWARD WINNING CD FOR KIDS! - BUY NOW FOR XMAS, BIRTHDAYS, TEACHER GIFTS...! Robin's 'Rainbow' Story: This was actually album number three for Unicorn Records. I had decided to re-mix and re-master only three projects for Village Children Records and record one new project. I loved recording this group of songs too. I had been working at the first radio network for children in the country, Radio AAHS (Children's Broadcast Corporation, now defunct). I had been blessed with a show of my own, Alphabet Soup, mid-mornings. Daily, I listened to children on the phone from all over the country talk about things that had to do with being children! They would call in and request their favorite songs, send me poems and stories and let me into their lives. I think anyone who has the airwaves has a great responsibility; these were children who trusted what we brought them each day and night on the radio. I learned a great deal from the many experts I had the opportunity to interview - from child development to children's authors. What a thrill to interview Tommi De Paola one day and Dr. T. Berry Brazelton the next! Henry L. Gates, Skip Humphrey, Linda Ellerby, Bob McGrath, Syreeta and Dr. Marti Erickson, to name just a few of the many folks who came to Alphabet Soup. In the early days, I could invite kids into the studio spontaneously to sing the 'ABC' song with me live on the air. What fun we had! I also learned, from the children, what music they liked and why. Children are not little adults who want to hear 'oldies' from the parents and grandparents era. That music has nothing to do with childhood. The children will get to all the nuances of adulthood and the complex relationships adults have with each other that are sung about in songs, soon enough. Sometimes I see talented children dressed up like little adults, singing adult songs - and I wonder what the kids are actually thinking about. Talent is great - let the children sing like children! Life is complicated enough as we 'grow up' - why push it on the children ahead of time? I learned that children really like songs about being children; songs about their world and their feelings with their questions. They like songs that consider them. That is what they told me, every day on the phone from all over the country. I have to tell you I received hundreds and hundreds of calls each day. I could only speak to dozens of the children any given day but the message was clear. My attempt at honoring what I learned, was this project I called, 'Rainbow In My Heart'. I had great popular success with 'Rainbow In My Heart'. The song, Ick Ick Ick (about the ills of junk food consumption) was on the Radio AAHS Top Ten list for weeks. We have digitally re-mixed, re-mastered and re-packaged the first version of this project, I hope you like the songs and the way it sounds today. I hope it sounds like FUN! Awards 1993 -'Performer of the Year' - MN Parent awards Robin 1994 - 'Woman of the Year' Gov. Carlson, MN awards Robin one of 10 honors granted for her work with and for children through multi-media and music 1996 - 'Parents Choice Gold' - for the TV series, Once Upon a Tree, which Robin co-created and co-produced, for Animal Planet Network TV 2003 - Childrens Music Web Award Winner While we all know that recognition by industry is gratifying for a variety of reasons, what is amazing is that people listen and are moved. What music lovers across the nation are saying: Dr. T. Berry Brazelton: 'Your music is wonderful!' Pediatrician, author & TV personality, Boston, MA Dr. Richard Grunow: 'Your music will make a contribution to the music education of children', Professor, Eastman School of Music, Rochester, NY 'I share my tape with my granchildren and we love it! I hope you will do many more.' Nancy Marshall, Seattle, WA My son, Alex, (5 years old) LOVES the 'Family' song on Rainbow in my Heart. He thinks it is a 'rock song' and that it has a 'rockin beat,' so he plays it over and over! Jill Turner, Maple Grove, MN My daughter sings along and dances to your music. Since we received your music, I listen to it more than my daughter. It cheers me up and brings out the kid in me.' Mrs. Maryann Healy, Buffalo, NY You have a beautiful singing voice! Mrs. Janet Hudgens, Indianpolis, IN I do babysitting in my home and Robin's music, Sweet Dreams, calms my babies down and lulls them to sleep at nap time. Her wonderful, soothing voice is a blessing and a nurturing ingredient in childcare. Anne Laurent, Excelsior, MN My kids are 4, 7 and 9 - thank you for making CD's that are safe, fun and really for kids! We love it! I let the teachers 'borrow' it for my youngest's daycare in church! Renie, mother, Venice FLA.

Here's what you say about
Robin Blair - Rainbow in My Heart.