Angie Stevens - Queen of This Mess 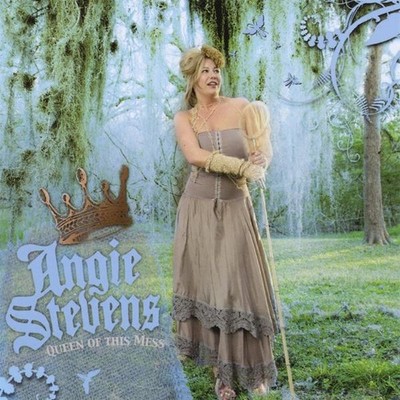 For a singer/songwriter to stand out from the pack, they have to possess the kind of magical voice that makes a listener stop in their tracks and pay attention. Denver's Angie Stevens has that kind of voice, and it's drenched in Americana akin to Patty Griffin or Emmylou Harris. Stevens also has the songwriting chops to match, as Westword Magazine recently named her Denver's Best Singer/Songwriter. Now Stevens is back with her third and most powerful album to date, Queen of This Mess, on Boss Koala Records and produced by Malcolm Burn. Burn, who has worked with Harris and Griffin as well as Midnight Oil and Patti Smith, wanted to keep things organic with his recording approach, something that intrigued Stevens. "He didn't use auto tune, kept takes to a minimum and mentored us on how Simon and Garfunkel, Bob Dylan and John Cougar Mellencamp used to do it. It left a lot of room for creativity and cut out the need for perfection," Stevens added. Stevens, whose music combines elements of alt-country, indie rock, contemporary folk and pop, has gained national attention over the last few years following the releases of her first two albums, I'm Okay (2005) and Stand Up Girl (2006). She's gained attention with a captivating live show that matches or exceeds the intensity on both albums. Her song, "Sleepwalking," was featured on HBO's "Big Love" and her video for "Stand Up Girl" was a pick of the week on CMT's "Top 20 Video Countdown." Stevens has toured as well, playing venues from Hotel Café in Los Angeles to Coors Field in Denver and other venues in 21 states; and has showcased at SXSW, Sundance Film Festival and at the inaugural Monolith Festival at Red Rocks in 2007. Stevens is sponsored by Coors Beer and Cowgirl Punk Clothing. Originally from the Northern Plains, Stevens pulls her music from her own life experience: The 1991 suicide of her older brother (Steven, the root of Angie's music and from where she gets her stage name), observing the struggle of her mother's alcoholism and trying to find her own way through the day-to-day havoc she has physically, mentally and emotionally endured. 'Go on: Just try to find a single soul who's seen Angie Stevens live and not been completely entranced. Backed by a stellar cast of musicians, Stevens engages audiences in a way that makes every performance feel intimate, like she's playing her songs just for you...Stevens makes the icicles form on your spine the minute she takes the stage.' -- Westword.

Here's what you say about
Angie Stevens - Queen of This Mess.