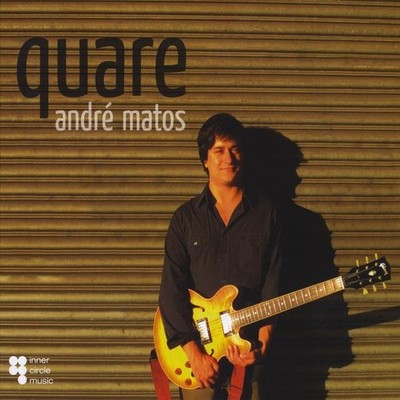 The distance between modern post-bop sounds and free jazz suffused with high-tech experimentalism narrows significantly on the new CD Quare from André Matos, a brilliant young guitarist and Portuguese native now living in the United States. Released on Greg Osby's Inner Circle Music, Quare is Matos's third album as a leader, and it features his spectral playing in various musical settings with accompaniment from some of the top young jazz artists on the scene today. Matos possesses a strikingly mature musical vision for an artist still in his late twenties. His first release, 2005's Pequenos Mundos (Small Worlds), showcases a more languid guitar style that stands atop the arrangements, but with his second album, Rosa-Shock, Matos began taking a more integrated approach in terms of balancing his instrumental voice with that of his bandmates. Key to Matos's development in this regard has been a steady association with pianist Leo Genovese (known also for his work with Argentine singer Sofia Rei Koutsovits) and bassist Thomas Morgan, as well with budding vocal star Sara Serpa, also from Portugal-and the guitarist´s partner in many musical settings. Adding drummer Ted Poor to the rhythm section and bringing in Noah Preminger on tenor saxophone for several cuts on Quare undeniably enhanced the musicality and adventurousness of the recording, a sign that Matos thinks compositionally and seeks the right atmosphere for his ideas. Quare (the word translates from Latin to "why" in several contexts, Matos says) leads off with "Lucky Star," an original that emphasizes the close musical relationship between Matos and Genovese, as the two musicians take turns on the sturdy melody while subtly supporting each other's improvisations. This strategy succeeds elsewhere on Quare, with Matos jumping along with the rhythm section on "Hanguing with Zuco" and then employing tasteful guitar effects on the ballad "Vigia." Often, Matos's guitar tone is reminiscent of Pat Martino and John Abercrombie but will readily mix in elements of blues and rock stylistically into his playing and writing, as heard in tracks like "Harlem Days," "Hope and Joy" and "Final Spin," respectively. As an improviser, Matos is more of a colorist, imbuing songs with harmonic inflections that benefit a song's totality instead of merely spotlighting his skills or flash. Both Matos and Serpa shine on the title track of Quare and another cut later on the album, "Seven," with guitar tiptoeing around wordless vocals that drift and sway around the melodies. Serpa, who has been featured recently in a band led by visionary alto sax player Greg Osby, gives an enchanting solo turn on a nearly three minute long voice intro to "Seven," that helps pace the proceedings. Also shaking the menu up some are three experimental mash-ups that will recall Bitches Brew, and a modal exercise called "Exile" that puts the spotlight on Preminger. All of the compositions are written by Matos, with one exception: "Canto do Tejo," which comes from the pen of Carlos Paredes, master of the Portuguese 12-string guitar. Matos gives the song an exquisite reading here, it's sweet and delicate melody perfectly rendered in a simple duo setting. Born in Lisbon, Matos originally wanted to play the drums as a child but ended up picking up his father's guitar instead. His parents listened to a variety of music, and Matos notes that an early exposure to Brazilian music had a big influence on him. He also played wooden flute, which, he says, nurtured an interest in improvisation. In his teens, Matos enjoyed the guitar playing of George Harrison, Angus Young, Muddy Waters, Jimmy Page, Slash and Kurt Cobain, then later on opened his ears to Wes Montgomery and Jim Hall, "the latter being one of my main inspirations to play jazz guitar," he says. By 17 he was studying and playing guitar seriously with the idea of pursuing a musical career. After a year at the prestigious Luis Villas-Boas School of the Hot Club de Portugal, Matos came to the United States to study at the Berklee College of Music, then continued his musical education at the New England Conservatory. Young jazz artists are usually counseled to stay focused on a certain style of playing to strengthen their instrumental voice, but Matos cannot resist moving between straight-ahead compositions and more avant-garde, experimental sounds. "It's a reflection of the way I hear music, and my influences," he says, adding, "I think it is also symptomatic of the rapidity in which I feel change and need to always do something else. I want to use my strengths and weaknesses to find places that challenge me more." Dividing his time between the United States and Portugal, it makes sense that many of Matos's compositions have a journeying sense to their overall sound. "Traveling definitely influences my music," Matos admits. "When I'm in New York, I have a constant feeling of being away from Lisbon and my hometown, Sintra. That sad, longing feeling-saudades, of course-is part of the Portuguese culture and very well expressed in fado music. So, to some extent, most of my music reflects images or experiences that I've had either in Portugal or in the United Sates, where I've lived since 2000. Not too long ago, I traveled west and visited the Grand Canyon. The trip was incredibly inspiring-something to be used on the next album!"

Here's what you say about
Andre Matos - Quare.