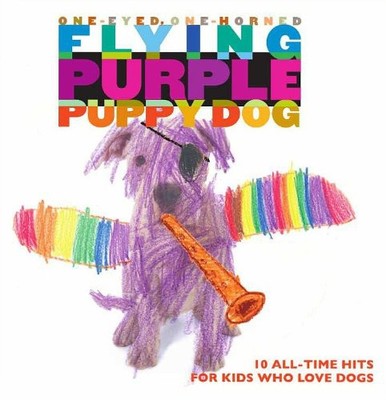 One day Marty Pekar walked into the post office and the woman behind the counter said, 'Hey, do you want another dog?' She knew he had dogs, they¹re always with him in the car. 'No,' he said. 'Absolutely not.' Then, 'where is it?' That¹s how Marty acquired his third dog, Faith, the one that has been the inspiration for this project. 'She's a VERY crazy-active border collie mix. I adopted her from a woman who couldn¹t take care of her anymore." Faith, along with her two compatriots, Ralphy and Zorro, accompany Pekar everywhere. He takes them into town each day to run errands. He talks to them. He sings to them. And one day Pekar decided to make a CD to celebrate dogs. The music is not only lively and infectious, it¹s good. Because every one of the 10 cuts were once hit singles. Pekar rewrote the lyrics to be all about dogs, acquired the rights to each of the songs (it took 6 months, a very good attorney, and song publishers who 'got it'), and re-recorded the songs using some singers from his record producing days of the 70s and 80s along with talented vocalists and musicians from the Albany New York area. Pekar spent most of his career as an advertising copywriter for the record business. He was considered the King of Record Advertising, say his colleagues, having created all the print and radio ads for Bob Dylan, Elvis Costello, Willie Nelson, Chicago, the O'Jays and countless others in the '60s though the early '80s. From there, he began producing records, including eleven albums of music by such artists as Jim Dawson, Eugene Pitt and the Jive Five, Randy and the Rainbows...all reunited with Pekar on the Purple Puppy Dog CD. 'I was looking for an authentic sound,' says Pekar. "I wanted these covers to capture the spirit of original hits as much as possible." That¹s because Pekar believes the old songs were perfect just as they were. 'I love dogs. And I love this music. When I take my pups into town, I listen to Oldies stations and I sing to them at the top of my lungs. I usually change the lyrics to be about them, and that¹s where this idea came from to begin with.' The title song, 'The Purple Puppy Dog,' is based on Sheb Wooley¹s 1958 novelty hit 'The Purple People Eater,' and lends itself perfectly to dogdom. But the hits don¹t stop there. The CD features 'Wake Up Little Puppy' (based on The Everly Brothers¹ 'Wake Up Little Susie'), 'True Fine Doggie' (from Little Richard¹s 'True Fine Mama'), and 'For My Precious Dog' (based on 'For Your Precious Love' by Jerry Butler and the Impressions). But no song sums up this exuberance of this project as well as the Cyndi Lauper cover, 'Dogs Just Want To Have Fun.' 'This whole project has been a leap of faith,' says Pekar, and it¹s clear there is no intended pun. But it¹s more than just a metaphor watching Faith the puppy leap and jostle with newcomer Matt Scaptura during the filming of '(Dogs, Dogs, Dogs) Made to Love,' a remake of the Eddie Hodges hit, '(Girls, Girls, Girls) Made to Love,' which serves as the album¹s first video. (There's also an all-dog video for "Dogs Just Want To Have Fun".) 'I truly believe that this music has the ability to touch kids, as well as the ability to touch that soft spot in people who, like me, are just crazy nuts about their dogs. I made this as a record for kids, but it¹s not just for kids. It¹s really for dog lovers of any age,' Pekar says.