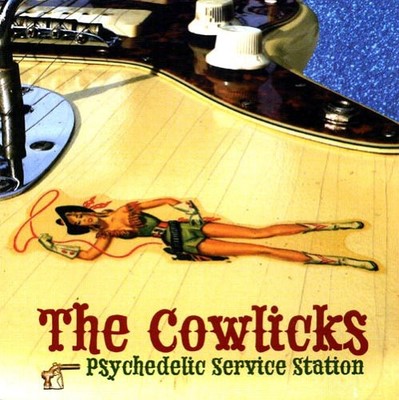 'Can't resist a track called 'Psychedelic Servive Station by The Cowlicks. They're obviously off their trolleys. Love em' for it! BBC Radio, Trailer Star Lounge New release by the winners of the California Music Award for 'Outstanding Country/Alt. Country Album of 2004' April 2006: Hot off the presses, less than a week from the factory, California DJs are saying: 'I think this is the one that is going to push them into the bigtime. I hope so, they deserve it.' -Peggy O' of KFJC's 'Out Behind The Barn' 'Psychedelic Service Station reminds me why I love these guys! Gram Parsons would be proud!' -Wesley Robertson of KVMR's 'Rockin' and Stompin' More about the Cowlicks and Todd Novak's music: 'This Quintet delivers catchy, countrified gems dripping with slide and mandolin mastery.' -MilesofMusic.com 'This isn't just pure countrified roots music: The song writing is so good, and the playing so intense, you think you are hearing a rocker who could be the next Tom Petty.. If Hank Williams and Tom Petty met, got trashed, and ended up jammin', it might have come out like this.' -Brad Kava, San Jose Mercury News 'The Cowlicks take the bull by the horns to corral a spot on the alt. Country music map' -Rick DelVecchio, San Francisco Chronicle 'A sweet slice of Byrds-flavored pie; classic/cosmic California tunefulness.' -Eric Babcock, Catamount Records The Cowlicks debut CD 'CWA'-Cowboys with Attitude' won the California Music Award for 'Outstanding Country/Alt. Country Album of 2004 (formerly the Bammies) beating out five other nominees including Merle Haggard and Buck Owens. The band was voted 'Best of the East Bay 2003 by the East Bay Express who state: 'The Cowlicks ooze twang easily, and are unpretentious to a fault. They can write the catchy hell out of a song.' The Cowlicks new CD Psychedelic Service Station was recorded at Expression Center for Digital Arts, and was produced by Todd Novak and Scott Theakston, with some assistance from Mike Anderson. Basic tracks were supervised by Jack Douglas (John Lennon, Aerosmith), Scott Theakston, George Borden, Mary Ann Zahorsky & Manuel Salas. All songs were written by Todd Novak/BMI/Captain Bernard except Sexy Sadie and Hand in My Pocket used by permission. The 12 Players on Psychedelic Service Station are: Todd Novak: lead vocals, electric and acoustic guitars, banjo, mandolin, ukulele, harmonica, & jewsharp. Mike Anderson: bass and backing vocals Kevin Woodhouse: drums Peter Tucker: drums Dave Zirbel: pedal steel guitar and dobro Gregory Arnell: mandolin Michael Hanna: mandolin, guitar, banjo & backing vocals additional banjo tracks are played by: Doug Blumer, Eli Smith, and Jeremy Baron. Scotty Hay: pedal steel guitar on Shoplifter HWY1 Brad Kava: harmonica on Treehouse.

Here's what you say about
Cowlicks - Psychedelic Service Station.