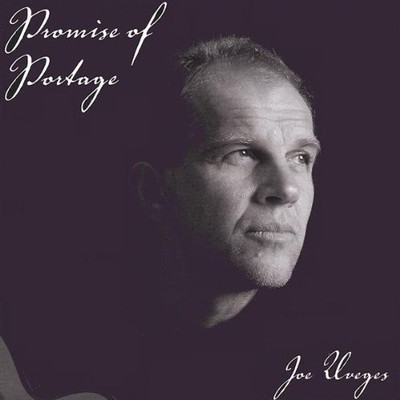 GAZETTE GO! Choice for BEST CD of the Year 2004 'Uveges' tender songwriting and warm vocals have made him one of Colorado Springs' most beloved musicians. He gave his fans a treat this year with 'Promise of Portage', his finest recording yet. The album is an emotional journey with plenty of musical rewards along the way.' This CD is a remarkably diverse, beautifully produced (Chris Rosser, Asheville, N.C.) collection of well-crafted songs that can best be described as songs of human longing. Bill Reed, music critic, says of this CD 'Uveges' greatest strength is his songwrtiting. The CD is filled with depth and spritituality.' Sounds like Yanni with lyric, doesn't it? It's not. The CD begins with a song ('Still Climbin') that speaks to both the personal as well as the greater human journey of growth and transformation. It is an anthemic song that you will hit repeat on again and again. The CD ends with the balance song entitled 'Take Her In', which is the gentle, image driven acknowledgment that it is in the reclamation of the feminine that we find both personal as well as human wholeness. The journey between these two poles is a sometimes sweet, sometimes tangled tale told by a series of voices including: a Catholic Great Depression mother from Portage (coaltown), Pennsylvania, a 'Bonnie and Clydesque' band robbing couple from San Antonio, a S.F. Taxi driver (cover of Harry Chapin's classic), a phone that talks('If She Picks Me Up'), the cripple at the pool of Bethsaida who tells the tale of his healing 30 years before by Jesus('Rise Up'), and a father searching for his drugged out daughter on Colfax Avenue('Lookin on Colfax'). This CD is about personal transformation. It is about 'portage', the carrying of 'cargo from one body of water to another'. Kathryn Eastburn, Arts and Entertainment Editor of the INDY says, ''Promise of Portage' is a beautifully produced CD...rythmically sophisticated and emotionally complex.' What else separates this CD from the giant barrage of pop/folk/country that commercial radio bombards us with each day, typified by generic romantic ideals and Disneyish love stories? These songs speak the truth of the human condition: the convoluted and intricate inter-weaving of the exterior love story (man and woman) with the interior love story (masculine and feminine). These songs speak to both journeys in powerful and provocative ways. This isn't pop. It's not country. It's beyond folk. This is melody, poetry and myth entwined in a kama sutra of songs. Joe Uveges is originally from Schoharie, NY but he currently resides in Colorado Springs, Colorado where he lives with his wife and 2 children. His songs have been featured on compilation discs including 'Addiction Songs' from Goodnight Kiss Music, and the 'Greater Than Life Collection' a Colorado based organization aimed at generating funds for Urban Peak, a homeless shelter for teens. His last 2 CD's have been awarded 'Best Local Releases' from the Colorado Springs Gazette. (2002 and 2004) Peace JOE.

Here's what you say about
Joe Uveges - Promise of Portage.