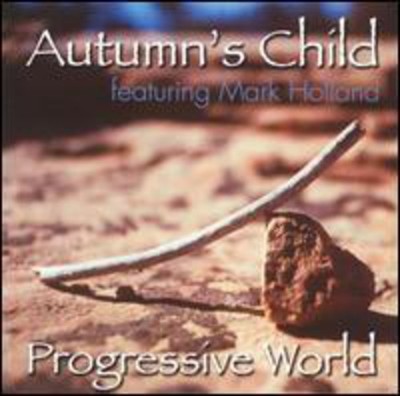 Autumn's Child at the time of this recording consists of Mark Holland, native American flutes with Peter Mayer - acoustic guitars, Jim Mayer - upright bass, N.Scott Robinson - world percussion and guest Peter Phippen - world flutes. 'Progressive World' has been nominated in the World Album category for Just Plain Folks Music Awards, including 2 compositions nominated from the same album in the Native American Songs category.'Progressive World' was voted #12 in the Top 25 CDs for 2002 for Echoes (Public Radio International). Mark Holland started Autumn's Child in 1995 and has recorded 8 CDs to date. He is a master native American flutist having performed with R.Carlos Nakai, Mary Youngblood and Bill Miller among others. This incarnation of Autumn's Child also opened for the group, Oregon to whom the opening track is dedicated. N. Scott Robinson is an ethno-musicologist that plays a wide array of various world percussion instruments. He has performed with Glen Velez, Paul Winter Consort as well as Nakai. Peter Mayer is a world-class guitarist, composer with his own project the Peter Mayer Group and has been a member of the Jimmy Buffet Band along with his brother, Jim for the last 15 years. Peter's playing is heavily influenced by Ralph Towner and Pat Metheny not Buffet. Jim Mayer is a solid bassist that can play all styles of music in the vein of Eberhard Weber, Charlie Haden, David Friesen to name a few. Jim also engineered this project. Peter Phippen is a world flutist and can be heard playing the xiao (Chinese flute), low D Irish whistle and quenacho (South American flute) with a dual chambered native American flute played by Holland on 'Spheres' atop a percussive sound-bed created and played by Henry Claude on such instruments as the mrdangum (2 sided drum from India), temple blocks, gourd water drums, gongs, singing bowls and pots and pans and more. 'A Seeking Heart' is a duo with Phippen on shakuhachi (Japanese flute) and Holland on native American flute... very plaintive for healing and massage. Phippen can also be heard playing bansuri (flute from India) with Holland, native flutes and Robinson on cajon and the vibraphone part by Claude on 'Inquire, Learn, Reflect.' This recording features the versatility of the native American flute in contexts with classical guitar, bass udu (clay pot), strung Indian bells and steel string guitar, bass and udu with brush and also cajon. The above examples can be heard on the album's opening three tracks. There are also compositions for flute and percussion duo showcasing the native flute with sanza (mbira), berimbau and dusongoni on 'Wacheva'. A free-piece called, 'Dream Sequence' uses native flutes with didgeridoo, overtone singing, drone, various shakers and rattles, looped guitar and bass creating a spacey meditation. Instruments from the earth that allow the listener to hear the world. (and other musical worlds) ***You can also hear Mark's newest solo native flute CD, 'For Such A Time As This' here at CD Baby!*** 'well crafted, balanced songs...tight musicianship... diverse and musically complex...Mark Holland keeps raising the level of artistry with the native American flute in combination with world instruments. Autumn's Child continues to push the envelope and utilize innovative and adventurous ways to create world/progressive music.' Dr. Kathleen Joyce-Grendahl, 'Executive Director of the International Native American Flute Association' See more info and bio material at this CD Baby site: Autumn's Child, 'Four Winds' the collection and 'Storytelling' and 'Songs From Within'.

Here's what you say about
Autumn's Child - Progressive World.