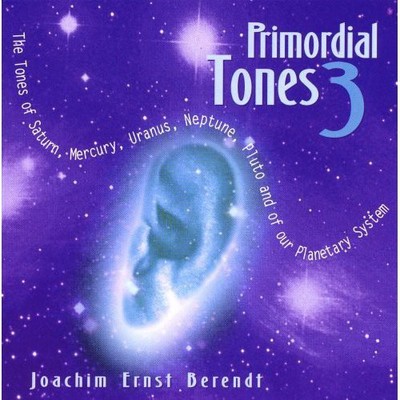 The world acclaimed expert on 'listening' introduces COUSTO's Tones Of The Planets. The frequencies of the earth, sun and the moon have been reproduced acoustically on the Sandawa, a multi string mono-chord instrument. When used in meditation, these sounds bring the listener's consciousness into harmony with the primordial energy of these heavenly bodies. Each of the three '2-CD Sets' is 2 hours in length of meditating time and comes each with a unique & rich booklet. A South American Native elder predicted: 'Wait until we can hear the Primordial Tones. That's when human consciousness will make a quantum leap.' JOACHIM-ERNST BERENDT (1922 - 2000) was born in 1922 in Berlin, the son of a pastor who was among the leading opponents of Hitler in the German Protestant Church and was killed in the concentration camp of Dachau. In 1945, at the age of 23, Berendt was one of the founders of the Southwest German Broadcasting Company (Südwestfunk). He is the author of 33 books which have been translated into 21 languages. With a total circulation of nearly two million, his Jazz Book (Lawrence Hill Publ., New York) is considered to be the best-selling book on music ever; at colleges and universities in the U.S. it is the most widely used textbook on jazz. In 1964 Berendt was the founder of the present-day Jazzfest Berlin. In 1967 he directed the very first World Music Festival, also in Berlin, in 1972 the Olympia Jazz Festival in Munich, in 1970 the World Jazz Festival at the world's fair in Osaka and in 1984 the event Jazz and World Music in Lincoln Center, New York. The ZEIT (German weekly newspaper) has called him the 'father of the modern world music movement.' On his 75th birthday the West German Broadcasting Company WDR Köln, the German-French cultural television station ARTE and many other broadcasters paid tribute to him with major television concerts. Since the second half of the 1970s Berendt has distinguished himself above all through his works on the acoustic character of the world and the significance of hearing - particularly in his books Nada Brahma: The World is Sound (Destiny Books, Rochester, oop/ East-West Publications, UK), The Third Ear (Henry Holt, New York, oop) and I Hear, Therefore I Am (Goldmann, oop) and in the workshops, seminars and lectures he has held world-wide. Berendt considers the primarily visual orientation of the human being in our modern television-dominated culture to be one-sided. 'It blurs and distorts our perception of the world.' He points out that in all of the great cultures in the history of mankind, hearing - and not seeing - was considered to be the most important human sense. Arnold Graf Keyserling: 'Nobody in our century has penetrated so deeply into the miracle of hearing than Joachim-Ernst Berendt.' And André Ratti (Basler Zeitung): 'Berendt is addressing people who are prepared to pose new and different questions, and are no longer satisfied with the old, worn-out answers.' He passed away on February 4, 2000.

Here's what you say about
Joachim Berendt - Primordial Tones 3.