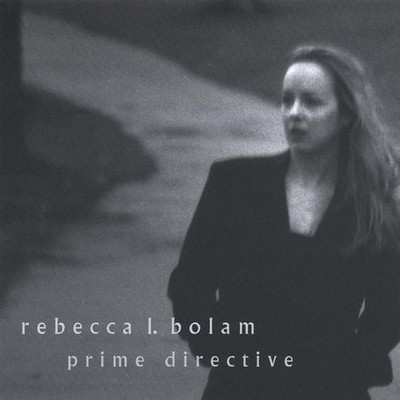 Rebecca L. Bolam has been songwriting since the age of 11. When her desire for musical creativity became unavoidably apparent, her parents had her audition to study with composer/recording artist of Mannheim Steamroller fame, Jackson Berkey. She studied with Jackson and his wife, Almeda for several years. They nurtured her writing style and gave her compositional tools to keep that style evolving, as well as giving her an extensive background in classical piano and voice. She performed regularly in the Omaha area at that time, mostly with the Berkeys in their original choral cantatas as well as her own shows of original material. Rebecca went on to receive her degree in vocal performance and composition from California Institute of the Arts, and has stayed in California since she graduated in 1996. She's been earning a living as a private music teacher as well as singing. For the past few years she's been working steadily on Prime Directive, her debut release. 'As an independent artist, it's truly been a labor of love. Writing and recording was the fullfilling and relatively easy part of the process. The difficult part was saving up the money to do the work, but it certainly has been worth it. I'm really pleased with the final product.' Currently, Rebecca has been performing in the Los Angeles area with her bandmates,The ISSUES, (Travis Daily - guitar, James Bennett - bass, & Ed Via - drums) and they're working steadily on new material for the second album. She is currently in rotation on UCLARadio.com, WKRP.FM and WRCK radio as well as stations in Belguim and Spain. Recently 'Prime Directive' was reviewed by INDEPENDENT SONGWRITER WEB MAGAZINE, and this is what they had to say: 'If vulnerability pulls at the heartstrings, then Rebecca L. Bolam shreds the aorta into a thousand pieces. 'Prime Directive' draws on the intensity of emotion to capture it's audience, but it shows no mercy once it has you in it's clutches. It's swaying fragility is nothing more than a butterfly with fangs; coaxing us into a world all her own.....one that is so hard to leave once we've been taken hostage. ' They've also awarded Rebecca as one of their Best Independent Songwriters on the net! Another review by ERASING CLOUDS WEB MAGAZINE Erasing Clouds Review: by John Stacey The female singer-songwriter genre is getting pretty crowded again. Rock, pop, angst, issue-led, roots, bluegrass, country, blues...the list is endlessly diverse and endlessly interesting. Of course, for every Caitlin Cary -- the former/existing, depending on what you've read, violinist/singer from Ryan Adams's band Whiskeytown -- whose albums are universally lauded and get to be discounted at places like Tower Records, there are dozens more who are probably better singers and more worthwhile of our hard-earned cash. Rebecca Bolam is one such. I took delivery of her album Prime Directive, which is her first independent release on the nattily-titled Supreme Overlord Music imprint, expecting to hear something bland and pretty middle-of-the-road; you know, the sort of stuff that's churned out ad nauseum and then speedily consigned to the trash bin. Boy, was I in for a shock. And the biggest shock was that Prime Directive is the sort of album Madonna would have made if she had started out as a singer and then became a dancer and not the other way round. The dancer Madonna always had a squeaky, disco duck type of voice that ultimately grated. Rebecca Bolam sounds incredibly like Madonna in that she Madonna's pitch, but lower, more mature and more memorable. The tracks 'Nobody Home' and 'Tonight,' with their swelling piano and measured arrangements, are everything Madonna could have been had her career taken another direction. The backing, from the Grammy award-winning band Ozomatli and including drummer Andy Mendoza, is firm and supple and musical. Prime Directive demands repeated plays. You won't be disappointed. Just get your order in for the follow-up!

Here's what you say about
Rebecca Bolam - Prime Directive.