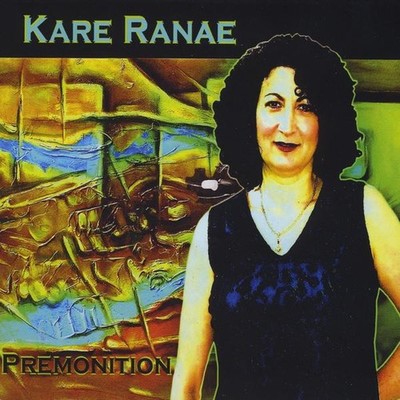 *JRP PROMOTIONS RAVE!!! Kare Ranae's voice and rhythm on her debut album entitled 'PREMONITION,' is unstoppable. She is a great rising talent and puts such enthusiasm and work into making these songs the best they can be. Her years spent in New Orleans inspired much of what is behind this album. This album tells stories. Every song flows like a river and is perfectly produced. Her voice as well as her unbeatable band, featuring producer-folk artist Rod MacDonald, guitarist John Smotherman and Jay Leslie saxophone solos, draws you in from track 1. I have listened and enjoyed this CD many times, and will still enjoy it as many times as I listen to it again.' *PREMONITION I had a premonition in the French quarter. It seemed to be the repetitive dream I had, the music of childhood, the disappointment of learning about the world. And, then came the hurricane that changed everything. The world seemed to keep turning, as I had in moving from place to place to place landing, somewhat, on my feet in the French Quarter. I'd finally arrived in New Orleans, Louisiana, early 80s, 20th century. The history of pirates and the familiarity of port towns and their excesses swirled around me. There was nowhere it was not there. It drove men and women to madness, to the edges of what they could barely understand, to foreign worlds of devious demons, to murder. These were the people I was there to help. I was also there to determine whether they were sane enough for us to try them in court. These people were the moviegoers, the mental hospital habitues, the manipulators avoiding jail. They hailed from the lower ninth ward all the way across town to the garden district. They all had distinct histories in that town, at times reported through the gauze of years of alcoholic or appetitic excess. There were great quakes in all of our lives, passionate shifts in the land beneath our feet, and this was two decades before hurricane Katrina. Perhaps our lives at that time were, in essence, a Premonition. *ART With admiration and gratitide for the artistic persistence of producer Rod MacDonald and the rest of the band, and the cover art by Naza. *MUSIC All lyrics and music were drawn, indirectly, from the work of others. Lyrics most prominently lifted derived from the writings of Joan Didion (Songwriter's Dilemma), quotations of John Lennon (The US v John Lennon) and various religious, spiritual, philosophic and literary works that fell into the songs.

Here's what you say about
Kare Ranae - Premonition.