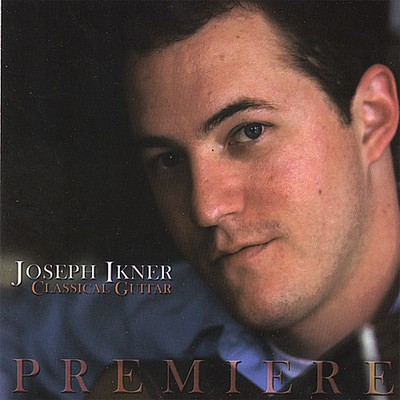 The Performer... "...one of the finest young guitarists of his generation. Joseph Ikner plays with a beautiful and rich tone, one possessed by very few guitarists," Dr. Elliot Frank, concert artist/director of guitar studies at East Carolina University. 'Joseph Ikner is a player of great strength and sensitivity. His combination of a refined technical skill and expressive phrasing produces music that has joy and power. A fine concert artist,' Dr. Andrew Zohn, concert artist/director of guitar studies at Columbus State University. As a soloist and chamber musician, Joseph Ikner is frequently invited to perform at university campuses, music festivals and for a variety of audiences throughout eastern North America. Enthusiastically received performances for the Mexican Cultural Institute in Washington, DC and a tour of Tennessee, Mississippi and Alabama highlight Joseph Ikner's recent concert happenings. Widely regarded as a dedicated, conscientious and effective guitar pedagogue, Joseph Ikner currently teaches guitar for the Loudoun County Public Schools in Virginia and is regularly sought to conduct master classes and clinics throughout the United States. Joseph Ikner has also directed guitar studies at Campbell University and served on the faculty at Shenandoah Conservatory while seeking a Doctorate of Musical Arts in Guitar Performance. He holds a MM, and BM, magna cum laude, in Guitar Performance from East Carolina University. The Music... The Spanish pianist and composer, Isaac Albéniz (1860-1909) was a prodigy, making his first recital appearance at the age of 4. His father escorted Albéniz on his first concert tour at the age of 8 and at 12 Albéniz arrived in South America, unaccompanied as a stowaway, and embarked on a precarious tour of the Americas. In 1873, Albéniz returned to Europe devoting the latter part of his life to composition, primarily for piano. Albeniz is noted for his portrayals of Spanish folk traditions. His piano work Asturias, also titled Leyenda (legend), depicts a region of northern Spain. Guitarist/composer Mauro Giuliani (1781-1829) is considered one of the greatest virtuosos of the nineteenth century. Born in southern Italy, Giuliani's reputation was known throughout Europe winning him such appellations as "the Divine Giuliani" and "Paganini of the Guitar." Giuliani's Opus 45 is a set of six variations on the popular Folias theme. Folias is a song-dance that appears as two types: an earlier (1577-1674 in Spain and Italy) and a later (1672-1750 in France and England). Giuliani uses the latter type, Folies d'Espagne as the theme for this set of variations. José Luis Merlin (b. 1952) is currently the music department director and guitar professor at the Mundo-Velázquez School of Music in Madrid, Spain. His celebrated compositions, performances and recordings have earned him much notoriety. Merlin's work for solo guitar, Suite del Recuerdo, is a suite of dances and homage to Argentina, his homeland. The suite begins with the melodic Evocación, introducing the thematic material utilized throughout the work, and is followed by the first dance, Zamba. The zamba is from northwest Argentina and is derived from the Chilean cueca and Peruvian marinera. Merlin describes the Zamba as a playful love game of conquest of a man over a woman with the final measures depicting their union. The third movement is the Chacarera. Originating in the province of Santiago del Estero, the chacarera is a dance found throughout Argentina with variant regional characteristics. The festive Carnavalito, another dance from northwest Argentina, is the fourth movement and is followed by the reappearance of the beautiful Evocación. The suite is concluded with the energetic Joropo, a Venezuelan dance resembling a marinera. Guitarist, composer/arranger Dr. Andrew Zohn (b. 1970) has distinguished himself as one of the foremost young musicians in America. His talents as a composer are present in Comedic Situation, a work for solo guitar commissioned by Campbell University and dedicated to Joseph Ikner. The form of Comedic Situation is based on that of a television sitcom. It begins with an introduction (station identification) followed by a lively theme song. The first appearance of the episode is a dialogue between two characters with the guitar occasionally imitating a laugh track. Comedic Situation then takes a brief break for four commercials: There's Help for you at the Hospital, Special at the Italian Restaurant, Those No Wax Floor Blues, and Vacation of a Lifetime. The Episode returns and the dialogue is continued, this time with more frequent appearances of the laugh tracks. Comedic Situation is concluded with a vivacious Finale. Little Bird is dedicated to my nephew Matthew Brian Prosser. The intention of this simple work for flute and guitar is to express the beauty of an innocent child.

Here's what you say about
Joseph Ikner - Premiere.