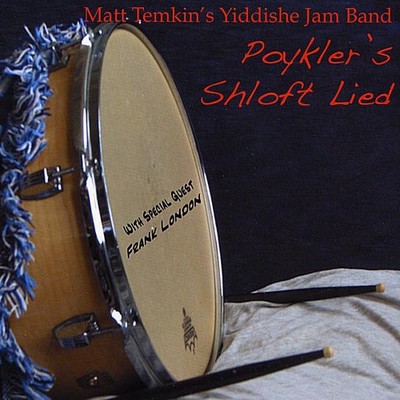 Matt Temkin's Yiddishe Jam Band is an all-star band featuring some of the best musicians playing Klezmer music today. Matt Temkin (drums), Mike Cohen (reeds), Binyumen Ginzberg (piano), Brian Glassman (bass), Jordan Hirsch (trumpet), Rachel Lemisch (trombone), Allen Watsky (guitar), as well as special guest Frank London (trumpet). On their debut CD, 'Poykler's Shloft Lied' they investigate the intersection of large combo Jazz and Yiddish dance music. This 7-piece band is influenced not only by Dave Tarras, and Sammy Musiker, but also Count Basie and James Brown. The tunes on the disc were chosen to pay tribute to the older generation of musicians that many of the musicians here have studied and played with including: Elaine Hoffman-Watts, German Goldenshteyn, The Epstein Brothers, Paul Pincus, Howie Leess, Ray Musiker, and Peter Sokolow. 1. Count Rumshinsky's Bulgar - This is what happens when Rumshinsky's Theatre Bulgar is fed through Quincy Jones talking about Count Basie. 2. Philly Bulgar - This lesser-known Bulgar, dating back to Europe, is one of the tunes that was commonly heard in the repertoire throughout a wide area. 3. Borsht, arr. Frank London - Take one part love song, and one part blizzard, mix in six musicians, and let them lay back and swing for four-and-a-half minutes. End result, ikh hob nokh aza tam nisht gefilt. 4. Chicago Medley - Digging around on Thanksgiving a number of years ago I came across this medley in my Grandfather's music library. What we have here are two "New York" bulgars surrounded by a dance version of the theatre tune 'Yash'. 5. Epstein - Many of us in the band have had the opportunity over the years to study or play with the Epstein Brothers. These are two of the many tunes that the Brothers made famous in the Hasidic Wedding Halls of Brooklyn. 6. German's Bulgar #9 - I first met German Goldenshteyn in the basement of the New England Conservatory of Music in 2000, and studied and worked with him until his unfortunate passing in the summer of 2006. Let us take you to a seaside resort and drink a schnepsl. 7. 7:40 - named after the time of a train going from Odessa to Kiev. A train the musicians were probably more likely to make after being up all night after a gig. 8. Poykler's Shloft Lied / Drummer's Lullaby - An original groove for the band to be able to solo over. Check out those low D's that Brian is playing on the de-tuned bass. Solos: Mike, Frank, Rachel, Matt and Allen. 9. Rumshinsky's Theatre Bulgar; A tune of many nicknames. You know who is leading the bandstand by what they call this tune. Some of the other more popular choices are 'Old Bulgar' and 'Drum Solo.'