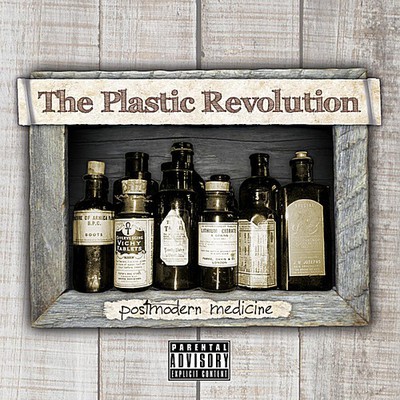 The last party The Plastic Revolution played at San Diego State University went something like this: over a thousand people gathered to see a local pop-punk/electronica band described by a group of sorority girls as, "Like a mixture of The Muse, My Chemical Romance, Panic At The Disco, and The Used, with better lyrics..." After seven kegs and nine hundred beers, the twobedroom guesthouse collapsed under the mountain of people standing on it; during which time the band didn't even notice or stop playing until the police stormed into the backyard from all angles. The Plastic Revolution (TPR) officially began as a conglomerate of the emotions and experiences of an adolescent male living in the new millennium. Originating as an outlet to express all the emotions modern man is taught to subdue, lead-singer Jake Skolnick writes catchy, substantive music. Likewise, the music of TPR is riddled with substance and is undeniably poignant. Characterized by untraditional song-structure, fantastically catchy hooks, and explosive exploratory lyrics, this music is truly a "revolution" of dynamic proportions. This kind of insight is what the pop-loving, everyday people of the world crave. It is music that is a social necessity in contemporary life: breaking all constraints and categorizations. Ultimately, no subject is taboo and this music is not merely pop/punk/electronica/hardcore or any other characterization. The Plastic Revolution is what we all are, a rough collection of the constant bombardment of stimuli thrown at us at all times; sometimes passionate and sometimes perverse, but always emotive. Releasing an independent acoustic album in 2005, which distributed over 2000 copies in the San Diego area, "A Night At 54th St." became a regular soundtrack to the lives of college students and partygoers everywhere in Southern California. After many acoustic performances on the West Coast and in Europe on a semester abroad, Jake combined forces with fellow "musical soldiers" Justin Carey, Tommy Kelly, Andy Davis, and the foursome exploded onto the Southern California music scene January of 2007. Playing to dozens of bars and packed parties over the year, TPR's popularity began to rise. As the band picked up bigger gigs (The Electronic Music Marathon, Headlining at Staump.com's Rock The Gaslamp) they started gaining label interest. On May 16, 2007 TPR played a sold-out Industry Showcase at Los Angeles' Club Goodhurt, which is featured in individual videos on the band's website. Since the band is quite attached to their unorthodox song-structure and content, TPR resisted the urge to sign any record contract offered and decided to stick with their punk-rock roots by recording and releasing their music with no deadlines. Such is the reason why at the end of 2007, TPR signed to their own independent label: Mannequin Vanity Records. TPR self-recorded and released their debut full-band recording Planning For Chaos, which was produced by Roland Ware (Rdub Recordings) and eventually bringing the project to Jeff Forest (Blink 182, Avenged Sevenfold, Atreyu, Incubus, As I Lay Dying) at Doubletime Studios for additional production, mixing and mastering. After Mannequin Vanity Records cut a distribution deal with iTunes, on November 27, 2007 the record became the first release on Mannequin Vanity Records. After a series of regional tours (east coast, middle-America, west coast) TPR picked up some endorsers (Audix Microphones, Spaun Drums, Tsunami Cables, Saints Row Custom Cases) and did a national tour of over 30 dates in 2009 (The Reigning Chaos Tour). In 2010 TPR began diligently working on their sophomore record and continued to tour the Western United States. Currently TPR is booking regional/international tours and working on their sophomore full-band recording: Postmodern Medicine is scheduled for release in Fall of 2011. The Plastic Revolution remains active with many charities: most recently TPR organized and performed at a benefit concert with Comedian Donnell Rawlings from The Dave Chappelle Show at New York's Josie Wood's Pub, which raised over $1,000 towards finding a cure for type 1 diabetes. Here's what others have said about The Plastic Revolution: "Really, Really, Impressive." -George Stein, Manager, Jeff Buckley "The songs have depth not often heard in today's lyrics; the vocals have range and true feeling. The Plastic Revolution makes you feel something for a change. Every song is memorable. Buy the album and it will be one of your most listened to." -Catlin Valles, Publicist, Valles Inc. "... it ROCKS and the production is beautiful! I love the integration of solid rock band textures with detailed electronic interlacing! Great Job!" -Joe Waters, Department Chair, San Diego State Electronic Music Program ________________________________________________________________________ Email: [email protected] Websites: theplasticrevolution.com Myspace.com/theplasticrevolution Facebook.com/theplasticrevolution Youtube.com/theplasticrevolution.

Here's what you say about
Plastic Revolution - Postmodern Medicine.