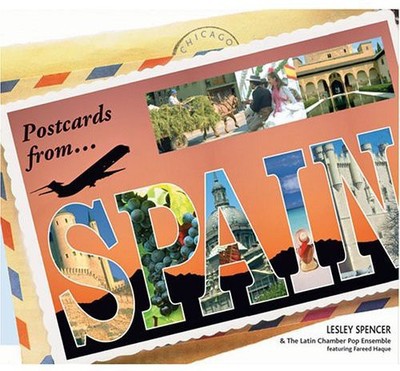 ARTIST BIO - LESLEY SPENCER (ASCAP) composer/pianist/producer Lesley Spencer was born into a military family in Puerto Rico and traveled extensively as a child - living many places in the U.S. and abroad. Recognized by the National Endowment for the Arts & Wyoming Arts Council, she has worked as a professional accompanist, music director, arranger, producer and recording artist. Lesley began her playing career at the University of Wyoming and after a season of working at the San Francisco Opera she moved to Chicago where she worked for many years as an Urban Gateways Artist and as an instructor & music director for Victory Gardens Theater. She has written and produced several CDs of piano based music which 'transcend the ordinary.' Her music has a strong visual quality evoking a wide range of emotions from the listener. Her earlier recordings, 'INSIDE THE MELODY, & PASSIONATE JOURNEY,' have established Lesley as an artist of unique talents. Ever evolving as an arranger, Lesley worked with some of the brightest lights in the Chicago music scene on her CDs, 'A MOVEABLE FEAST' - her first Latin Chamber Pop Ensemble CD released in 1999, and the sequel THE BEST OF TIMES', released in 2000. Both CDs featured internationally acclaimed guitarist Fareed Haque. In 2001 Lesley teamed up with Fareed Haque to produce 'AUTHENTIC FLAVORS' - Lesley Spencer & the Latin Chamber Pop Ensemble - featuring Fareed Haque & guest soloist - Jim Gailloreto. Also joining the production team for 'AUTHENTIC FLAVORS' were well known Chicago arrangers Pete Labella and Ricardo Lorenz. Recorded at STUDIOCHICAGO - 'AUTHENTIC FLAVORS' was completed in May of 2002. In the summer of 2002 - inspired by the thoughts, prayers, and sentiments of countless e-mails from people who were struggling to digest and put into perspective the tragic events of 9/11 - Lesley released an enhanced CD single and a video of her 'SEPT 11TH ANTHEM'. It captures in words & music the essence of that struggle and infuses it with hope - providing us with an ANTHEM truly appropriate for the 21st century. 'SEPT 11TH ANTHEM ' was the subject of an NBC CHANNEL 5 news story in Chicago by Mary Ann Ahern which was broadcast on 7/02/02 & 7/3/02. Co-produced by Lesley Spencer & Pete Labella, the ANTHEM features some of the finest professional choral singers & musicians in Chicago. In 2003 Lesley wrote and produced a combination orchestral, smaller ensemble & world music CD called 'CLASSICAL DELIGHT' - Lesley Spencer & the Latin Chamber Pop Ensemble & Orchestra. Pete Labella was the head arranger, Ricardo Lorenz the guest arranger - and Fareed Haque the featured guitar soloist - with special guests Glen Ellyn Children's Chorus - Emily Ellsworth, Director. They were joined by additional top-notch studio jazz musicians and orchestral players from the Chicago Lyric Opera and Grant Park Symphony Orchestras. CLASSICAL DELIGHT received critical acclaim and significant radio play and is still frequently heard on NPR's Morning Edition. Lesley's music has been licensed for several audio & video projects including inspirational cassettes by cosmetics doyenne & motivational speaker Marilyn Miglin - and most recently, her orchestral tour de force 'TRIBUTE' - from 'CLASSICAL DELIGHT' - was chosen to be the main theme of a PBS bound documentary called 'Stones From the Soil' - filmed & directed by Chicago filmmaker, Michael Caplan. The documentary will be broadcast on PBS in May of 2005. In addition to working as a freelance musician in Chicago, Lesley also works on special projects for Radio City Recording, teaches privately and hangs out with her three golden retrievers.

Here's what you say about
Lesley Spencer - Postcards from Spain.