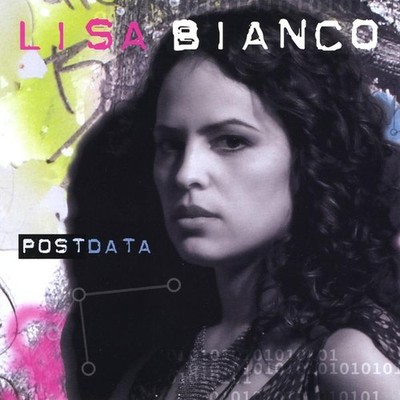 "Distinctive NYC underground songstress.' - CMJ 'Sideways,' [is] a melodic ballad that has all the makings of a VH1 classic, featuring glassy pianos, superb melodies and grungy Bianco lead lines.' - The Aquarian *********************************************************** Finding a balance between the visceral and intellectual is one of the trickiest things to pull off in music, but Lisa Bianco manages to do just that. Her songs, evocative and inventive, straddle the line between punk rock passion and singer/songwriter introspection to create something uniquely her own. On her new album, Post-Data, Bianco takes on the new and constantly evolving relationship between people and a data-saturated world, searching for the personal connection that breathes life into humanity...and music. A performer emerging from New York City's underground scene, Bianco has earned laudatory notices from publications such as CMJ ('Distinctive NYC underground songstress'), the Village Voice ("galvanizing") and East Coast Rocker ('Bianco is spreading a unique sound throughout the New York underground. An interesting blend of alternative, guitar rock, and pure punk aggression has led to a very distinct calling'). That praise has come in the wake of her electric live performances - shows that erase the distance between artist and audience. Lisa says, "I play and tour because it provides a sense of purpose. I often feel like a messenger. When I'm on stage, I feel so alive, and I work to convey that to everyone." Subsequently, her fan base has been a strong and growing one, cultivated by years of hitting the NYC club circuit at venues such as the Knitting Factory, Arlene's Grocery, the Bitter End, CBGB's and the Saint in Asbury Park, NJ. She has recently done an east coast/Canadian tour, performed several times at NYC's Anti-Folk Festival on a bill with contemporaries such as Nicole Atkins and Regina Spektor, as well as playing the CMJ Music Marathon and the Wave Gathering Festival in Asbury Park, in addition to several other music festivals and conferences. Her influences, an eclectic mix of artists such as Radiohead, Patti Smith, Led Zeppelin, and power-pop artists like The Bangles and Blondie, have informed her musical sensibility, a combination of the hard and the heady, with an intensely emotional foundation. For her new album, Post-Data, Lisa enlisted producer/engineer Bryan Russell (Envy on the Coast, Straylight Run, assistant engineer on Coldplay's X&Y) to man the boards. According to Lisa, it was a great match: "When we first met," she recounts, "I went to his studio and he had tons of guitars and effects. I'm big into effects so I knew we would sync. We just bounced ideas off of one another and had a great working relationship. He's a rock guy and I wanted to make a rock record that mixes the feel of a traditional rock band with my more experimental tendencies." From the opening notes of "Tumble Like Weeds," Post-Data is an album that reaches out to break through the wall between artist and listener. "Something To Prove" occurs as a statement of purpose, and with it's driving guitars and rhythm section, the song opens up into an anthem of sorts - an announcement of the stakes that Bianco is playing for. Bianco's voice is luminous in the album's first single, the heart-rending "Sideways," a melodic ballad that inspires with it's urging to hold on through the hard times. "It's a song about how the unthinkable sometimes happens - that thing we thought was impossible, like losing a member of our family. And then it's about how we deal with it," she explains. The album's closer, "Post Data - We Communicate" is the tie that binds the album, and it's Post-Data's magnum opus. A rollicking and emotionally affecting rocker, it incisively describes the realm of modern communication; people speaking to each other through terminals, developing an emotional attachment to data. Lisa goes further, "We've locked ourselves into this media in the way we run our lives. We've replaced seeing each other physically with texts and emails." Hypnotic, hooky and experimental, the song encapsulates the unique vision that is pervasive throughout the album. As she begins to play and tour in support of Post-Data, Lisa will be bringing her vision to life on stage, with the power and passion that is how she expresses herself. "I had a fan tell me after I played that I showed them the difference between merely living and being alive," she says proudly. "That's why I don't mind carrying my guitars and amp up two flights of stairs after every show." And with Post-Data, she has made the most affecting and thought provoking music of her young career. *********************************************************** Lisa Bianco: Vocals and Guitars David Leatherwood: Bass Guitar Dan Duggins: Drums Featuring: Charlie Seich: Euphonium on 'Catch & Weave' Bryan Russell: Keyboards and Programming Produced, engineered, and mixed by Bryan Russell at Red Wire Audio, Brooklyn, NY Mastered by Sarah Register at The Lodge, NYC.

Here's what you say about
Lisa Bianco - Post Data.

1) Tumble Like Weeds
2) All the Things That Remind Me
3) Sideways
4) Whatever the Cost
5) Already Gone
6) Catch ; Weave
7) Something to Prove
8) Falling Leaves
9) As Good As It Gets
10) Post Data/We Communicate