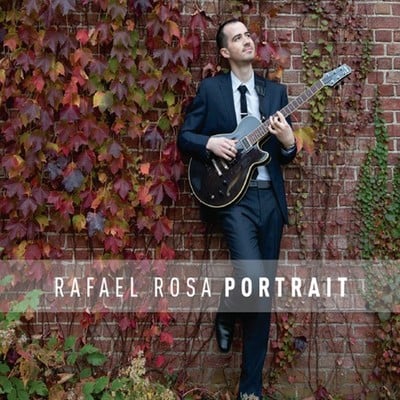 'Rafael Rosa is a humble virtuoso composer & guitarist that can play any kind of music with authority. He is part of a new seed of artists of this present time, compromised with the listener in mind. Producing songs for this CD, performing with him & his friends has been a real enjoyable experience. ' - John Benitez, Grammy Winning Bassist/Composer "Rafael has a beautiful sound, heart, ideas, sensibility and will to develop his language and expand his musical world. I have no doubt he is going to surprise us and I look forward to hearing more of his thrilling music." - Jean Michel Pilc, 2013 Guggenheim Fellowship Award Winner Master Pianist/Composer/Educator/Author "Rafael is a musician with a huge heart. He radiates a love of life and his art shows tremendous generosity and trust. These qualities are what you will hear in the beautiful music he has created in "Portrait" " - Kenny Werner, 2010 Guggeheim Fellowship Award Winner Master Pianist/Composer/Educator/Author "Music can change your life in an instant, it changed mine. It has never let me down, I believe in music". - Rafael Rosa, Guitarist/Composer Rafael has been driving himself ever since picking up the guitar at age 15 in his home Puerto Rico. Primarily self-taught and learning music by ear, it was a matter of time before formal education came into effect five years later at the Inter-American University. Rafael completed a BA Degree in Popular Music as it allowed the continuation of studying with the local greats: Ricardo Pons, Fernando Mattina, Ángel David Mattos, Aldemar Valentín, Francisco Serrano, Ismael Rodriguez Andrew Lazaro, Pedro Rivera Toledo, Hector Matos, L. Raúl Romero and Miguel Cubano. Under this collaboration of educators an extensive arsenal of Jazz, Funk, Latin, Rock, and Pop Music was absorbed. During these first years of college life Rafael performed weekly with his group 4 Corners, which featured Jonathan Suazo, Leonardo Osuna, and Dan Martinez. Rafael also performed with the likes of Edmar Colón, Ramón Vázquez, Eric Figueroa, as well as appearing in several jazz festivals and getting emphatically reviewed for his playing on recordings with bassist Alex "Apolo" Ayala, as well as a nomination from ACAM (Asociación de Compositores y Autores Musicales) for Best Jazz Album with Felipe Fournier and his group {menos es más}. At the age of 25 Rafael graduated with honors and was given the opportunity to teach at his alma mater. In the fall of 2011 Rafael was accepted to NYU's Steinhardt School of Music Graduate Degree Program in Jazz Performance as well as given an opportunity to be part of the music faculty. While in NY, he has had the chance to study with legendary jazz artists: Kenny Werner, Bruce Arnold, Miguel Zenón, Tony Moreno, Jean Michel Pilc, Dave Pietro, Brad Shepik, Ralph Alessi, Rich Shemaria, Adriano Santos, Stefon Harris, Alan Ferber, John Benítez, John Scofield, Wayne Krantz and Peter Bernstein. He has had a chance to perform with his own group, local bands like Night Of The Living Funk at the legendary rock venue The Bitter End, with performances in venues The Blue Note Jazz Club, and Tutuma Social Club, SOMETHIN' Jazz Club, DROM, Shrine World Music Venue and more. Rafael has completed his Graduate Degree @ NYU and currently lives in Brooklyn, NY. Being called upon to perform as a sideman, traveling back and forth between his homeland Puerto Rico and NY to perform, as well as continuing to write music for his group and future projects. He is currently putting the finishing touches on his debut album entitled "Portrait" set to be released in December of 2013. "Portrait" features an incredible cast of master musicians Jean-Michel Pilc, Kenny Werner, Michael Rodriguez, Grammy Award Winning Bassist/Composer John Benitez (Who Co-Produced the album) & many more. Rafael's music brings Puerto Rico's rhythms, jazz's colorful harmony, and rock's aggressiveness for a very unique sound canvas.

Here's what you say about
Rafael Rosa - Portrait.