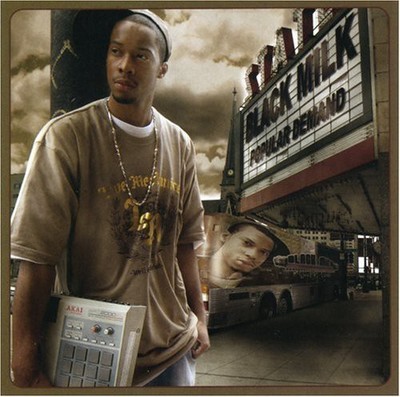 Though still in his early twenties, Black Milk has been a rising talent both as a producer and as an emcee within the Detroit hip hop scene for several years. Following the untimely deaths of J Dilla and Proof (D-12) in 2006, hip hop fans all over the world are anxious for a new generation of hip hop artists from the Motor City to carry the torch for it's fallen heroes. Black Milk isn't asking to carry the torch; he's already running with it. Born Curtis Cross in 1983, Black first fell in love with hip-hop in the mid-nineties when he discovered the music of groups like A Tribe Called Quest and de la Soul. He took a particular interest to making beats and after purchasing the cheapest drum machine he could find, began crafting his first beat tapes by recording on cassettes through a home karaoke machine. Like many of his peers in the production game, he obsessively worked in his basement to develop his sound and master his sampling equipment. After one of his early tapes ended up in the hands of Slum Village, he was invited to the studio and sold his first tracks. Black's production work first appeared on Slum's mixtape Dirty District (on which he also debuted as an emcee) in the summer of 2002, and he produced the standout track "What Is This" on their Capitol Records LP Trinity (Past, Present & Future) which was released a few months later. It was around this time that Black Milk discovered a chemistry with another young producer from Detroit named Young RJ. They teamed up to form the duo BR Gunna, and went on to release the hit CD Dirty District, Vol. 2 on Barak Records in June 2004, which featured vocals from Black, J Dilla, Elzhi, MC Breed, and others. The record sold over 20,000 units according to Nielsen Soundscan. Also in June 2002, the critically-lauded third Slum Village album Detroit Deli hit stores with 11 of it's 13 tracks produced by BR Gunna (the other two were produced by Kanye West and J Dilla), which further established Black Milk as a rising star. Despite achieving success as part of a production team, Black worked hard to build his skills as an emcee and was determined to validate himself as a solo artist. While maintaining his working relationship with Young RJ, he recorded his first full-length solo project entitled Sound of the City releasing it through his own Music House label in 2005. With still-improving production and guest appearances from the finest emcees in Detroit, Black surprised many by holding his own on the mic with his sharp lyricism, catchy hooks, finessed flows, and unmistakable swagger. The extraordinary year was capped off with the release of Slum Village 's self-titled fourth album, which featured solo production from Black Milk as well as more work from BR Gunna, including "EZ Up" which was licensed by Chevrolet and used in nationally televised commercials for their 2006 vehicles. As word spread of Black's talent, the demand for his beats began to reach artists outside of the Detroit scene. In 2006, Black Milk extended his sphere of influence by producing tracks for Pharoahe Monch, Lloyd Banks, and Canibus. He also inked his first record contract with Fat Beats Records, and is set to release his next solo release Popular Demand in 2007. As a charismatic emcee and already-accomplished producer, Black Milk is poised to be the next young artist from Detroit to excel on a national stage. The future of Detroit hip-hop starts now.

Here's what you say about
Black Milk - Popular Demand.