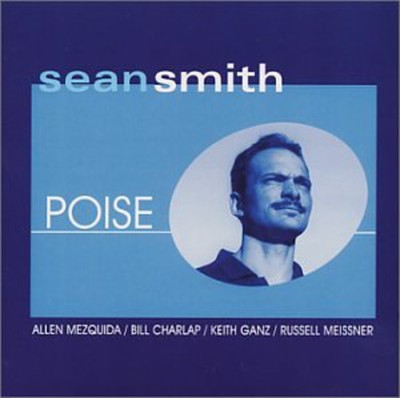 NEW YORK CITY, August 2001 - Sean Smith's beautiful compositions and well seasoned quartet are captured by Sony's new Direct Stream Digital (DSD) recording technology on the composer, bassists second solo CD 'Poise'. 'The quartet recorded this CD live all in the same room which has a beautiful, warm, natural sound', said Smith. 'It's all captured by the recording. We didn't have to wear headphones and had great sight lines to see one another. These are luxuries in the studio. There is so much air and life in the result for you to hear'. This recording is one of a few direct to DSD recordings to date, and represents a continuing commitment by Ambient Records of Stamford, Connecticut to make fine recordings of important music available to music listeners. 'I can think of no better way to showcase Sean's composing and bass playing skills than with this revolutionary new technology', said Ambient Records President Mark Conese. 'Sony's DSD draws the listener into the music in the same way as a great LP played back on a good turntable used to. The resolution is far beyond that of conventional compact discs and even DVD audio discs'. The Music - Songful and melodic compositions, reminiscent of the 'Cool School' of the 1950's. The Sean Smith Quartet is Sean Smith on bass, Allen Mezquida on alto saxophone, Russell Meissner on drums, with Bill Charlap on piano or Keith Ganz on guitar. The members of the quartet have played together for many years sharing a similar passion and vision for music, helping define a very distinctive group sound noted for a rare lyrical quality. With Sean's songful and melodic compositions underscoring the quartet, their unique acoustic sound, at times reminiscent of the 'Cool School' of the 1950's, has developed out of a mutual respect and love for the jazz tradition and beyond. 'Poise' on the Ambient label (CD-002) is the Sean Smith Quartet's second recording. This CD documents some of the music of a very prolific composer played by a band at ease with one another. AMG EXPERT REVIEW: This is the second CD led by brilliant bassist/composer Sean Smith and featuring his long-term working band. Recorded with high-resolution DSD technology, with no production edits or musician headphones, the sound of Poise is warm, clean, and very naturalistic. It showcases 13 of Smith's tuneful, non-derivative originals, rendered by five superb musicians in a variety of formats. For example, guitar and piano alternate as the fourth member of the quartet, Smith's soulful bass leads 'A Blues for Donald' with just guitar accompaniment, and the closing 'Art Song' is an elegant piano solo. The arrangements are cool, the ballads moody and gorgeous. 'Nobody's Hoedown' is full of wry humor, while an old cowboy tune gets a free jazz makeover in 'Red Rivers and Valleys/Appendix.' Other highlights include the decidedly undepressed 'Tropical Depression,' the film noir feel of 'Hugging the Edges,' and the deeply moving 'Gratitude in the Minor,' with Alan Mezquida's eloquent, primal sax and a beautiful Bill Charlap solo punctuated by a stunning moment when the group seems to hold it's collective breath. The delicate mix of Keith Ganz' guitar and Russell Meissner's brushes on 'Poise,' the horn/bass weave on 'Short Ballad,' and the flat-out 'Wise Guys,' with great, whirling solos by all concerned, are also noteworthy. True to it's title - which also means 'equilibrium' - this CD is a balance of contrasts. Both sophisticated and emotional, intricate and uncluttered, it reveals richer artistry with each spin. Highly recommended. - Judith Schlesinger 2001 CD Ambient 002.

Here's what you say about
Sean Smith - Poise.