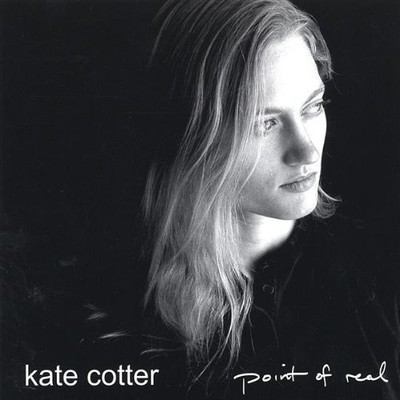 Tucked away between Lake Tahoe and the high desert of the American West is one of the best kept secrets in independent music. In the city of Reno, a frontier town with just the right mix of homespun vice and sublime natural beauty, a subterranean community of working musicians has sprung from the coffee shops and bars of America's biggest little city. An assortment of homegrown talent infused with Bay Area edge, the Reno music scene has been sustained by a diversity of musical styles, ranging from ska and punk to jazz and metal. Among the subculture of singer/songwriters, whose sound is marked by zany soulfulness is Kate Cotter, a Reno native whose ethereal voice, poetic craftmanship, and off-beat sense of humor has earned her a loyal following. As the arts editor from the local weekly describes her: "It is the rare artist who can weave metaphor-rich lyrics, haunting vocals and catchy melodies into something that is neither self-serious nor sticky-sweet, something that falls on the indie side of pop and well-groomed side of folk." Although reminiscent of Joni Mitchell, and at times drawing comparisons to Imogen Heap, Sarah McLachlan, and Dido, Cotter's breathy voice has it's own hypnotic charm. Voted among the best local musicians in Northern Nevada in 2006, Cotter has won numerous prestigious awards and honors, including the Nevada Arts Council Fellowship and the Sierra Arts Foundation Performing Arts Grant. Cotter has played shows with a wide range of musicians, including the likes of folk legend John Gorka, Seth Horan (formerly of Vertical Horizon), and Shana Morrison (daughter of Van Morrison). A nomad at heart, Cotter has toured nationally and internationally, often weaving the experiences of her travels into the texture of her music. Cotter's first album Point of Real was released in 2002 to considerable local attention. Evoking the musical spirit of Tracy Chapman, Toad the Wet Sprocket, and Counting Crows, Point of Real is a ballad-rich contemplation of the beautiful absurdity of human relationships and contemplation of the divine. Cotter draws from the landscape of the unconscious and the profound details of everyday life; with allusions to parables and pilgrimages, her songs probe the crisis of what it means to be fully known and knowable to one another and one's self. To quote from the album, Cotter's music expresses "how by living we are healed." Her highly anticipated second album, August, is scheduled for release in August of 2007. While honoring the acoustic roots of the first album, August incorporates an electric edge, punctuated by violin and trumpet. Driven by these added musical elements, as well as Cotter's truly haunting voice, August is a darker, more lyrically introspective album than Point of Real. But ultimately, August is imbued with Cotter's infectious and unwavering faith in the mystery of life and the hope of redemption. In this powerful second album, a wiser, more mature Cotter proves that musical integrity and experimentation do not have to be sacrificed for commercial appeal.

Here's what you say about
Kate Cotter - Point of Real.