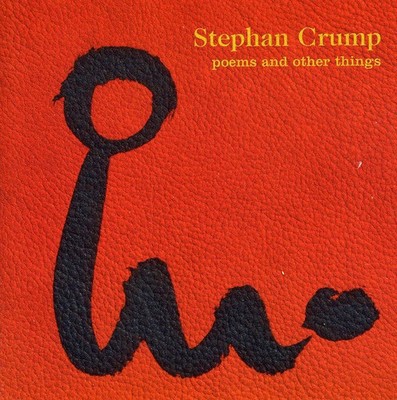 Described by Cadence magazine as 'a session-long study in contemporary lyricism', this collection of melodic pieces forges a place beyond time and genre, where melancholy is met with hope. Arranged for two, three, and four instruments, the music features: Chris Cheek on tenor and soprano saxophones, Roberta Piket on piano, Rob Garcia on drums, and Stephan Crump on acoustic bass. In his debut recording as a leader, Memphis native Stephan Crump displays the maturity and depth one would expect from a highly in-demand bassist on the New York jazz scene. More than just a bassist and a leader, Crump as a composer reveals a rare earnestness and Polish. These tone poems, at once moody and optimistic, speak directly with our emotions. BIO from StephanCrump.com: Memphis-bred bassist Stephan Crump is among the latest generation of up-and-coming players on the NYC jazz scene. As a sideman with mainstream jazz stars, downtown explorers, singer/songwriters and others, he has become known for the elegance and purposeful groove of his acoustic and electric bass playing. As a composer, he is emerging as a singular voice. Shunning barriers of musical genre, Stephan has performed and recorded in the US and across the globe with a diverse list of musicians- from Motown legends Ashford and Simpson to Portishead's Dave McDonald, The Violent Femmes' Gordon Gano, Bruce Springsteen, Michael McDonald, Grammy Award-winning singer/songwriter Tom Chapin, Lucy Kaplansky, Mahavishnu Project, Big Ass Truck, Dave Liebman, Billy Hart, Sonny Fortune, Eddie Henderson, Ernie Watts, Greg Osby, Kenny Werner, Marvin Stamm, Frank Foster, Bobby Previte, and late blues legend Johnny Clyde Copeland. Currently, Stephan can be heard as a long-standing member of the Vijay Iyer Quartet, the Liberty Ellman Quartet, Joel Harrison's Free Country, and singer/songwriter Jen Chapin's band. While maintaining a busy schedule as a sideman, including regular studio work for film, television, and radio, Stephan remains intensely involved with composing and performing his own music. His compositions can be heard in Miramax, HBO, Showtime, Bravo, and Simple Focus Films, as well as on his two albums as a leader, Poems and Other Things and Tuckahoe, the latter of which, in addition to receiving enthusiastic reviews, has been number one on several jazz radio playlists across the country. Stephan is currently preparing for the October 10th release of his newest album, Rosetta, on the Papillon Sounds label. This new recording features an evocative string trio format with long-time allies, guitarists Jamie Fox and Liberty Ellman. In addition to writing, arranging and producing his own music, Stephan has recently expanded his role as producer and arranger into his long-time collaboration with singer/songwriter Jen Chapin -first, for her debut Hybrid Recordings release, Linger, and now for her follow-up album, Ready, which was just released on July 11th. Stephan was raised in music. His mother, an amateur pianist from Paris, and his Memphis-born father, an architect and jazz drummer, provided a home that was rich in their two native cultures, French and Southern. After several years of classical piano study and two years with the alto saxophone, Stephan picked up the bass guitar at age thirteen and was soon playing in a variety of groups, performing in festivals, and touring the Southeastern U. S. By the end of high school he was leading his own jazz/rock trio, which performed and recorded his original compositions. Stephan received his Bachelor of Music degree from Amherst College, where he studied under Pulitzer Prize-winning composer Lewis Spratlin and was awarded the Sundquist Prize for performance and composition. While at Amherst he began studying the acoustic bass, with a focus on classical training that culminated in a year of study abroad in Paris with Gary Karr-protégé Patrick Hardouineau. Stephan's jazz studies at Amherst included work with jazz greats Max Roach, Frank Foster, and Ray Drummond. Upon leaving Amherst, he toured the U.S. and Canada with the Tommy Dorsey Band before moving to New York. After arriving in New York, Stephan continued his studies with bass virtuoso Michael Moore. Stephan is an enthusiastic endorser of Reverend basses, AMT acoustic bass microphones, and Aguilar bass amplifiers.

Here's what you say about
Stephan Crump - Poems & Other Things.