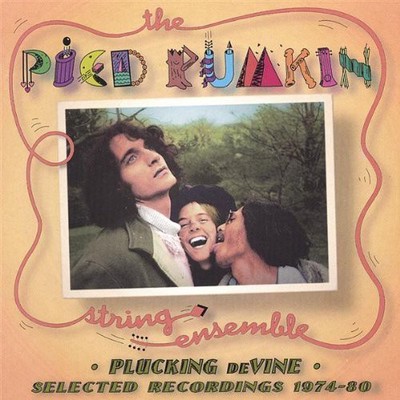 The tunes on this disc are harvested from 4 albums created between 1974 and 1980 by Rick Scott, Joe Mock, and Shari Ulrich. PLUCKING deVINE SONG DESCRIPTIONS! (Note: each song's description is written by the composer of that song). Instruments: Rick - dulcimer. Joe - guitar and piano. Shari - fiddle and flute. 1. I Believe (written by Rick Scott). One of the first songs I ever wrote. It's about me discovering the dulcimer as a chameleon instrument -- it goes from classical to swamp stomp to gospel chorus. Ain't it amazing? Just four strings! Featuring Shari on vocals, with dulcimer, fiddle, and guitar. 2. Kootenay Bark (written by Joe Mock) Images of life events in the country from the 60's documented in song. The style ranges from funky to folky, with guitar, dulcimer and fiddle. Featuring Joe on vocals, with guitar, fiddle, and dulcimer. 3. De Fiddle Medley (arranged by Shari Ulrich). It starts with one. Then a second. A third can't resist joining in. Soon there's not a toe in the room not tapping to the rhythm. This song is a medley of the classic songs 'Over the Waterfall', 'The Wind That Shakes the Barley', and 'Bonaparte's Retreat'. Featuring the fiddle, dulicmer, and guitar. 4. You Can Change The World (written by Joe Mock) Well, you can y'know! A little diddy to empower people to make a difference in our world. Featuring Joe on vocals, with guitar, flute, and dulcimer. 5. and 9. People I Love You and Yo De Do Do (both written by Rick Scott) These two songs come from the same experience: living and working in Japan 1971-72. It was a profound experience and I will always have the most special place in my heart for traditional Japanese culture. These two songs try to express my over-the-top six-foot-two hair-to-my-waist affection to a culture that really abhors that sort of behaviour. I'm really sorry and I really love you. People I Love You features Rick on vocals, with dulcimer, fiddle, and guitar. Yo De Do Do features fiddle, dulcimer, and guitar, and Rick on vocals 'yo de do do-ing.' 6. There Twas Her Tam - An early opus, written around 1973 (written by Rick Scott) Why shouldn't a song be almost 7 minutes long? What is it about anyway? Why are there so many tempo changes. I didn't know any better. I wrote it right when I first met Shari and I knew she had to sing the verses. Featuring Shari and Rick on vocals, with dulicmer, piano, and guitar. Guest appearances by Doug Edwards on bass and Geoff Eyre on drums. 7. Bless the Kind Heart country ballad. (written by Joe Mock) A song of thanksgiving from the life of a musician on the road. Harmonica, fiddle, dulcimer and guitar and down-home harmonies. Featuring Joe on vocals, with guitar, fiddle, and dulcimer. 8. Fear of Flying ballad. (written by Joe Mock). A cry for more heart in what is being presented in the night music world. Truly a classic that is received with love whenever it is played. Featuring Shari on vocals, with piano and dulcimer accompaniment. 9. see song 5 10. Juggler and the Fawn ballad (written by Joe Mock) A love poem sprinkled and tossed against a background of classical guitar stylings. The juggler (lover) says much but perhaps says nothing. But suddenly. . .The plaintive voice of Shari and the mood expands into a refreshing new melody to end the peice. Flute, guitar and dulcimer instrumentation. 11. Doin' The One Time (written by Rick Scott) An expression I have known since childhood without ever really knowing what it meant. Therefore this song explains my interpretation. Featuring Rick on vocals, with dulcimer, fiddle, and guitar. Guest appearances by Albert St. Albert on percussion and Tom Hazlitt on bass. 12. Tree (written by Rick Scott) Of the tree, for the tree, by the tree. My reverence of wood is lifelong. This is my offering. Featuring Rick on vocals, with flute, dulcimer, and guitar. Guest appearances by Albert St. Albert on percussion and Tom Hazlitt on bass. 13. St. Christopher - ballad (written by Joe Mock) A plea to St. Christoper to carry the singer through three stages of life. A classical motif begins and ends the composition. Guitar, dulcimer and fiddle instrumentation. Featuring Joe on vocals, with guitar, fiddle, and dulcimer. Guest appearances by Albert St. Albert on percussion and Tom Hazlitt on bass. 14. Mushroom Madrigal - Instrumental with a singing chorus (written by Rick Scott) A lilting, elvin stomp written in a off the wall dulcimer tuning and then suddenly there was Joe taking the first Irish exit ramp with new bridges and choruses and a horde of ace musicians including a bassoon player from the London Symphony who just happened to be at Pinewood Studios while we were laying the track down and invited Joe to write a chart for him. Which Joe did with grand aplomb... Featuring fiddle, dulcimer, piano. Guest appearances by Geoff Eyre on drums, Rene Worst on bass, and Claire Lawrence on saxophone.

Here's what you say about
The Pied Pumkin String Ensemble - Plucking Devine.