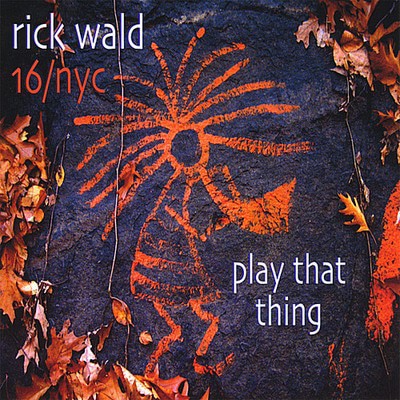 Leader/composer/arranger: Rick Wald trumpets: Earl Gardner, Seneca Black, John Eckert, Jack Walrath trombones: Sam Burtis, Noah Bless, Art Baron, George Flynn (bass bone) saxes: Lou Marini (alto/sop./fl./alto fl.), Loren Stillman (alto/fl.), Ted Nash (tenor/fl.), Adam Kolker (tenor/clar.), Terry Goss (bari/bass clar.) piano: Ted Kooshian bass: Chip Jackson (Dennis Irwin on Prince of Darkness only) drums: Jeff Brillinger Rick has led a number of small groups and large jazz ensembles in New York City since the '70's. His previous CD with 16/NYC titled 'Castaneda's Dreams' received unanimous recommendations and praise from Jazz Times, Jazz Improv, Jazz Week, Cadence, All About Jazz and a number of other publications. Rick feels that along with the music on 'Castaneda's Dreams', his new CD - 'Play That Thing' - represents his best writing, and says 16/NYC is the best band he's ever had. 'I don't think I could have a band like this anywhere else. Not only does every musician in 16/NYC have great chops and technical ability, they're all also creative soloists who've developed their own unique musical personalities. They haven't just attempted to clone the sounds and styles of well known jazz stars. New York City doesn't have a monopoly on great jazz musicians. There are excellent jazz players all around the world nowadays. But nowhere else has the sheer number of smokin' players and diversity of styles that are available to composers and bandleaders in New York. And there's sort of an indefinable edge in the sound of a NYC band. You can't live here and be unaffected by the energy and intensity of the city, and that energy and intensity is reflected in the playing of the jazz musicians here.' It's also reflected in Rick's compositions and arrangements. In addition to five new original compositions on 'PLay That Thing', Rick's arrangements of three well known tunes written by other musicians provide a new and fresh sound for these jazz classics. Though he credits a long list of jazz greats who've influenced his writing - including Ellington, Mingus, Gil Evans, Gerald Wilson, Oliver Nelson, Thad Jones and Gary McFarland - Rick, like his band members, has developed his own unique sound.

Here's what you say about
Rick Wald - Play That Thing.