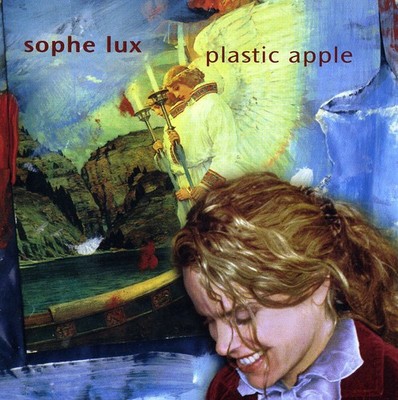 SOPHE LUX ZARATHUSTRA RECORDS 1631 NE BROADWAY ST. SUITE 222 PORTLAND, OR 97232 'Intelligent rock starts are a rarity these days which is why Sophe Lux should be relished and soaked up like the sun...A female cocktail of Liz Phair, Tori Amos, and Cat POwer.' -The Oregonian A&E 'The music of Sophe Lux is a sad and beautiful reflection of the worldly culture of today...A rich blend of the the world's finest indie legends.' -Sizzling CD's 'This is definitley one of those albums that I consider myself lucky to review, as I will continue to listen to it...Lux has a beautiful voice and accompanies it with beautiful music...Heart-wrenching lyrics, passionate vocals...' -Opening Bands 'A little bit Tori, a little bit raspy, a little bit country takes command of PLastic Apple's brooding, melodic vibe. Each song is packed with philosophic and theologic musings'-The Willamette Week 'Hip-hopping lifesavas headlined the house but too late. The buzz had already been stolen by Sophe Lux, fronted by Wendy Haynes, sister of Oscar-coated fil director Todd Haynes.' -The Oregonian, Living Section 'Sophe Lux's music is thought provoking, passionate and intelligent,combining the creative visionary poetics of Bob Dylan with the vocal force of Tori Amos.' -Jennifer Goodman, Arc 75 Records 'Sophe Lux is a deep and important band.' -Eric Laddel, Universal Music 'Sophe Lux simultaneously evokes the dark intensity of PJ Harvey and the observant eye of Suzanne Vega.' Fred Von Lohmann, Music Industry Attorney 'Sophe Lux's music is dark, arresting, passionate, and cathartic.' Chris Monaco, Good Life Music The Music The dreamy music of Sophe Lux, (which translates into 'the light of wisdom') delivers visionary aural poetics which explore the pathos and longing of the human soul. Their passionate and cathartic songs can be described as hypnotic music for bookish dreamers, wayward outcasts, and closet romantics. The Album Each harrowing song on debut album by Sophe Lux, Plastic Apple, is a poetic treasure in it's own right, each song reflecting a world of pathos and light. Frontwoman Wendy Lynne Haynes's richly textured vocals and passionate melodies are charged with fiery, irrepressible power that gets under your skin. The band's diverse musical range has earned them comparisons to Cat Power, Tori Amos, Amiee Mann, PJ Harvey, Bob Dylan, and Kurt Cobain. Weaving rich, literary dreamscapes, Sophe Lux touches on themes that are vastly original. They reache into the essence of what it means to be human, offering us images of both the soul's vulnerability and the eternal search for hope. THE BAND The band is made up of four run away mystics from another time and space: Sophe Lux is fronted by Wendy Lynne Haynes. Born into a clan of artists and musicians in the sunburned suburbs of Southern California, Wendy developed her musical sensibilities listening to Joni Mitchell, Bob Dylan, and Nirvana. Sophe plugged in her first guitar at age 11 and has been writing and performing her own music ever since. While growing up Wendy performed theatricals with her filmmaker brother, Todd Haynes. Looking at the world through a shifting lens of surrealist poets and painters, Wendy was inspired to write and direct performance art pieces. She moved on to liberal arts studies in New York and fine art studies in Lacoste, France. Current News Sophe Lux has been performing in Portland since April of this year. They have shows coming up in Portland at Nocturnal, Stumptown, The Bitter End, The green Room, The Tonic, and more. Please check out sophelux.com for updated show information. The Album Plastic Apple features a dynamic collaboration of artistic talents. Co-producer, bass player, and effects guru, Larry Crane (recording engineer for such indie superstars as Sleater-Kinney, Stephen Malkmus, Elliot Smith; well respected editor of Tape-Op Magazine, and owner of the renowned JackPot! Recording Studio). Drummer, John Moen (drummer for Pavement, front-man Stephen Malkmus's band The Jicks). Keys player, Mike Clark (keys player for Pavement, front-man Stephen Malkmus's band, The Jicks).

Here's what you say about
Sophe Lux - Plastic Apple.