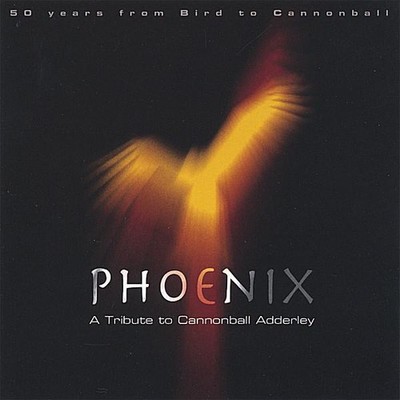 As a sideman and solo artist, Chris 'Doc' Stewart has successfully recorded any number of releases since 1983, but the tribute to Cannonball Adderley had to be his most ambitious. The approach that he chose provided a springboard for an album that was different enough, without compromising the integrity of the original quintet. 'Phoenix' was first recorded in February, March and April of 1975. Prominently featured were cornetist Nat Adderley, acoustic bassist Sam Jones, Louis Hayes and Roy McCurdy on drums, as well as Mike Wolff and George Duke on keyboards. The release also included Airto Moreira on percussion, conga and drums, which shored up Cannonball's stellar line-up of musicians considerably. In an effort to provide variation to the original release, Stewart chose to substitute Nat Adderley's cornet for the tenor saxophone. In another endeavor to provide uniqueness, Chris composed all of the arrangements with a single-minded concept at the forefront. He wanted his tribute to Cannonball Adderley to be as reflective as the original. In addition to the album's main theme, the CD celebrates the Golden Anniversary of Charlie Bird's passing. The album also chronicles Adderley's debut in 1955, which has led to the recording of 'Phoenix: A Tribute to Cannonball Adderley' and the subtitle_"50 Years from Bird to Cannonball." The original title was even augmented to reflect a new identity as well. In 1975, the album was entitled "Phenix," a slight variation from Chris Stewart's title. Conceptually and in Egyptian mythology: "Phoenix was a beautiful bird which lived in the Arabian desert for five or six hundred years and then consumed itself in fire, rising renewed from the ashes to start another long life; it is used as a symbol of immortality." The result of Chris Stewart's timely piece of work is a beautifully crafted release immortalizing one of America's most revered jazz icons. The album's predecessor was next to the last recording released by Cannonball Adderley, it too was a retrospective look back at a career that spanned more than 25 years. He died of a stroke August 8, 1975 at the age of 46. The impact of 'Phoenix: A Tribute to Cannonball Adderley' - "50 Years from Bird to Cannonball" is huge. Chris handpicked crafting of each member of the band facilitates this monumental task, while breathing new life into an era that was tremendously influential to say the least. The velvet textures contained within the limitless attributes of this album are smoothly conveyed. Stewart's portrayal of the 1975 release adds a 21st century touch of originality filled with classic improvisation. The instrumental variations Chris provides are testaments to his own level of creativity. Overall, there is a rhythmic appeal and supplemental coolness attached to eleven tracks of musical tribute. Chris Stewart has redefined the original message into an upscale vessel of individual intuitiveness, one that is primed to push the envelope of jazz even further than the first. But make no mistake about it, the voice you hear is all Stewart's, even as he echoes the presence of Cannonball Adderley looming in the background. 'Phoenix: A Tribute to Cannonball Adderley' has the necessary ingredients for a high degree of jazz activated symbolism. Saxophonist Lucas Pino takes on the shroud of Nat Adderley's cornet with sensitivity and brilliance. He does so without the burden of exaggerated imitation, but do take note; the overall scope of this recording is it's superb ability to pay tribute to a jazz legend without being predictable. Stewart has injected a tremendous amount of Cannonball's style and intellect into every nook and cranny of this release. Tenor saxophonist Lucas Pino may be young, but like a fine wine his sound is invitingly delicate and smooth in style. Pianist Dan Delaney provides yet another posture, he expands upon a colorful panoramic spectrum Chris Stewart has so eloquently painted. Dan's passionate licks are effervescent and translucent throughout. When examining this recording for everything artistically correct, the whole project bleeds passion and heartfelt emotion. At first glance, this unique special tribute to Cannonball Adderley may be misconstrued as merely another copycat intrusion that lacks any consideration. But jazz beginners and connoisseurs alike will have a renewed respect for one of jazz's finest saxophonists, most of which has come through the creative flow of Chris "Doc" Stewart. The album could well be one of the finest Cannonball Adderley tributes heard to date.

Here's what you say about
Chris "Doc" Stewart - Phoenix: Tribute to Cannonball Adderley.