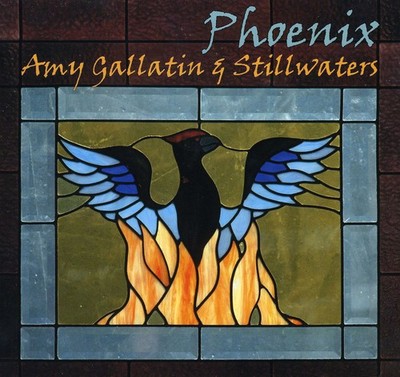 'Phoenix' is Amy Gallatin & Stillwaters' long-awaited band project, the first since 2001's 'Live in Europe'. Amy Gallatin has been a staple on the acoustic music scene since the release of her 'Long Way Home' in 1998--a collaboration with ace Nashville producer Rich Adler (Valerie Smith, Iris DeMent, John Hartford, Dolly Parton)--which featured her shimmering, heartfelt vocals and quality song selection. Veteran bluegrasser Roger Williams, long known for his masterful touch on the resophonic guitar during his tenure with White Mountain Bluegrass, Salamander Crossing, and the IBMA-award-nominated Southern Rail, is now coming into his own as a vocalist and songwriter. Together with long-time bassist/harmony vocalist John Urbanik, they form the core of Stillwaters. Frequent sideman Ben Pearce adds mandolin, along with young Mike Barnett (Northern Lights, Tony Trishka) on fiddle. CMH 'Pickin' On' series producer Dave Dick, who lent his arranging skills to the project, layers the tapestry with banjo, mandolin, and guitar. The project was recorded by former Front Range bassist Bob Dick, who guests on bass on three cuts. The all-acoustic songs explore the gamut of American roots music, from the sprightly original instrumental 'Bb Polka', to the country-flavored cuts of 'River of Love' and Buck Owens' 'You're For Me', from the dreamy traditional tune 'The Water is Wide' to the bluegrass makeover of the Burns Sisters' 'Dance Upon This Earth'. Amy found herself at a personal and professional crossroads in 2004 after struggling to pursue music as a primary occupation for almost 20 years. After a three-month hiatus during which she traveled the world in pursuit of her other passion, scuba diving--a trip that included Thailand, Micronesia, Australia, Cambodia, and Vietnam, and living mostly on boats out at sea--she returned to the United States to see what her future held. The commitment of dobroist/vocalist Roger Williams, who had performed with her band in the past, reinvigorated her musically, as well as personally. Together with Stillwaters veteran John Urbanik, they entered into an ambitious recording and touring schedule with virtually all new material interspersed with some vintage fan favorites. The title 'Phoenix' speaks of all that is possible when artists surrender to the flow and live their passion. Today Stillwaters is back and better than ever! Bluegrass Unlimited Magazine says: 'Gallatin's voice is obviously well-trained, lending an effortless purity to her delivery of each song. That, combined with her willingness to feature her band, and the often-overlooked instrumental wizardry and versatility of Roger Williams and Dave Dick, allows the collective sound of Stillwaters to be exceptionally smooth and polished. Gallatin and Stillwaters have...managed the delicate balancing act of being both cohesive and eclectic...(and)...Gallatin adds her crystalline voice and fine ear for a song...'Phoenix' is proof that this is a group deserving of a listen from all.'

Here's what you say about
Amy Gallatin - Phoenix.