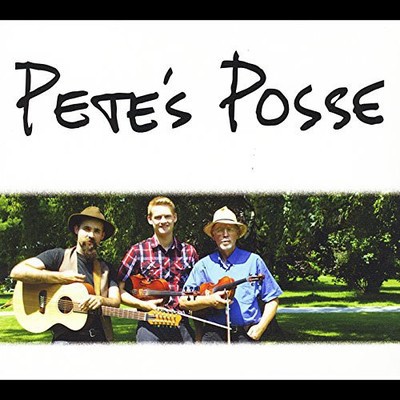 Twin fiddles in tight, wild harmony over hi-powered guitar and pounding footwork. Mandolin, clawhammer banjo, jawharp and rocking keyboards adding their voices to the mix. Old songs and tunes lyrical and driving along side brand new ones. That's the multi-generational heart and mind of PETE'S POSSE at work and at play. The well known multi-instrumentalist and troubadour PETE SUTHERLAND has decades of concert touring, teaching and studio production behind him. His all-Vermont "POSSE" includes his talented young fiddle protégé and fellow Clayfoot Strutter, OLIVER SCANLON, and the dynamic accompanist TRISTAN HENDERSON, also of Atlantic Crossing and Pipers Den. Featuring Pete's rootsy songs, the band's original and traditional fiddle music, and a few unique covers, this band provides a fine opportunity for an intimate listen to an ever-evolving musical friendship that spans generations! A warm voiced singer, songsmith and accomplished multi-instrumentalist, known equally for his potent originals and his intense recreations of age old ballads and fiery fiddle tunes, Pete Sutherland "covers the map" and shines with a "...pure spirit which infuses every bit of his music, and cannot fail to move all who hear him." (the American Festival of Fiddle Tunes). Sutherland is a veteran of many touring and recording groups including Metamora, Rhythm In Shoes and the Woods Tea Company and is a founding member of the long running 'contradance jamband' The Clayfoot Strutters. He is also a producer with over 80 projects under his belt, and a prolific songwriter covered by the likes of Cathy Fink and Marcy Marxer, Jay Ungar and Molly Mason, Nightingale and Altan. His recent solo projects include 'The Wilderness Road', 'Sunday River' and 'Farmland: The VT School Songs Project'. With early training in viola which led him to a stint with the Vermont Youth Orchestra, fiddler, mandolinist and tunesmith Oliver Scanlon was introduced to his mentor Pete and the parallel universe of fiddle music at the age of nine. His enthusiasm led him to seek out further learning and performing opportunities with master fiddlers at workshops and music camps. In 2008, Oliver and a few middle school friends formed the group which became the popular teenage contradance band The Irregulars. In 2013 he both co-founded the Posse and became the youngest member of Pete's long running dance band The Clayfoot Strutters. A recent high school graduate, Oliver's senior Project was a solo CD, "The Pond Jam". Quickly becoming a sought after accompanist, session musician and performer in Vermont, Tristan Henderson grew up playing a variety of music genres before jumping into traditional music. He acquired his ability to play anything with stings (and a few without) as a teenager a weekly blues/country/folk music session near his family home in Pomfret, Vermont. He was a 2013 winner of the Young Tradition Vermont talent contest with bagpiper Hazen Metro and in addition to Pete's Posse, he also performs with Atlantic Crossing and Pipers Den. Pete's Posse launched their first (self-titled) CD (Epact 120) in the fall of 2014 with a nine-week cross-country tour, playing concerts and contradances in 17 states. The joy of building an ever-more rock-solid sound while exploring the edges of the fiddle-band genre, and the buzz they created across the contradance diaspora propelled them headlong into making plans for 2015: a follow-up CD and a busy schedule of local and regional gigs. The multi-generational heartbeat of the Posse. 'For three people who initially weren't going to become a band some things, like their chemistry together, were meant to be.' - Dillon Walsh, The Vermont Standard 'Such a treat getting to work with you guys last night! Rockin' tunes and great energy on-stage.' - Kalia Kliban, CA Dance Caller 'A great big 'Thank You!' to Pete's Posse for the wonderful contra dance music last night at Chantilly Hall in Charlotte! Pete, Oliver and Tristan do an amazing job of creating the perfect sound for our danced minded feet!' - Sandy Brand, Charlotte Dancer 'We've had a lot of house concerts but the one last night with Pete's Posse was an eleven on the awesomeness scale. We can only try to imagine what it would be like to DANCE to their energetic, driving sets!' - Joyce Miller, Grass Valley CA.