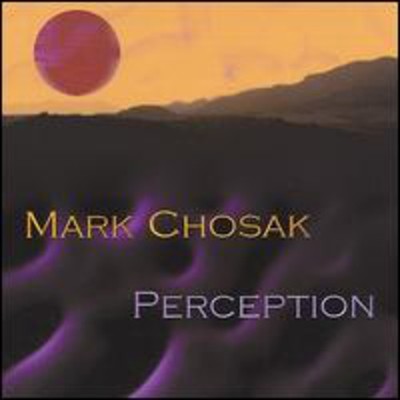 Mark Chosak has been playing guitar for over 30 years and composing professionally for film, television and interactive media for the past 16 years. 'Perception' is his first solo release of instrumental jazz music and the original compositions on this album span his writing career with influences of straight-ahead and smooth jazz, funk, latin and blues. 'I have made an effort to offer a variety of music for all listening tastes and present songs which are both melodic and fresh to the ear'. The album features a line-up of talented Los Angeles session musicians including: Bill Fulton (keyboards), Tom Zink (keyboards), Jason Harnell (drums), Ric Fierabracci (electric bass), Trey Henry (acoustic bass), Bob Sheppard (sax and flute), Anne King (flugelhorn), Ramon Yslas (percussion), and Mark Chosak (guitars). 'All of the players on the album have made a real contribution to the songs and the recording process, including wonderful solos from Bob, Jason, Bill, Ric and Tom, which I think makes this album so much fun to listen to'. A word or two about the songs... The album opens with 'Give And Take', a blend of samba (de-caf) with a laid back funk section that opens up for solos. The title is a basic reflection of life and how we must deal with each other's ups and downs. 'Slink' is simply a blues tune with a lot of chord changes that slither or 'slink' around the basic I-IV-V chords of the blues. 'Perception' is written in a jazz-waltz feel and the title is sort of a one-word commentary on reality as we experience it individually, communally, and spiritually. 'Take The Fifth' is basically a compositional exercise abusing the interval of a fifth as the title implies. 'Revenge Of The Furniture-Tag Police' obviously needs some 'splaynin'. It started as a song title that popped into my head and demanded music be written for it; so I composed a fast be-bop style jazz tune that alternates between 'dangerous' and 'madcap', figuring that those Furniture-Tag Police would be in a big hurry to ...well, you know! 'A Place Inside' is written as a light bossa and the title alludes to those calm moments when we look inside ourselves (a-oummmmmmm...). 'Shades Of Red' was inspired by the lunar eclipse a few years back, when at it's peak, the moon took on a deep red glow as I watched from a rooftop. The song starts in a jazz waltz feel and becomes elusive, playing with the meter, with a solo section in 4/4 time. 'Between The Pipes' is the obligatory 'burning' jazz-fusion tune on the album; this one starts with a roaring drum solo and doesn't let up until the end. 'Blue As I Wanna Be' is a basic 12/8 slow-blues (for basketball fans of....), again with a lot of jazz chord changes.

Here's what you say about
Mark Chosak - Perception.