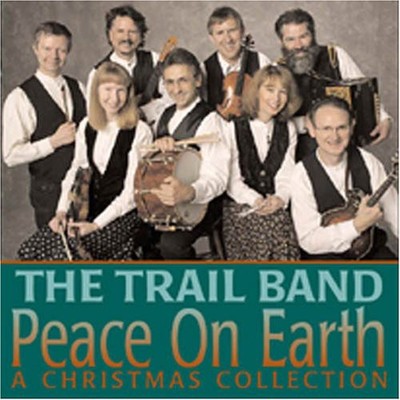 Peace On Earth is a collection of traditional and original Christmas songs arranged by The Trail Band that illustrates their passion for music of all styles and cultures. Their five lead singers and unique instrumental blend of brass and string instruments have made their winter tours an annual holiday ritual for Northwest concert-goers for over 10 years. These arrangements of folk, pop, gospel, and early music styles feature piano, pennywhistle, mandolin, fiddles, alphorns, guitar, and full brass. Legendary blues/gospel singer, Linda Hornbuckle, appears as a guest vocalist. What The Critics Say About The Trail Band '... an absolute must!' Victory Music Review '...sparkling ensemble interplay...' Marty Hughley, The Oregonian 'A stellar cast of musicians... delightful arrangements...' Tim Casebeer Willamette Week '...nothing short of remarkable.' Nancy Helsabeck, Siuslaw News 'The Trail Band sang like angels and played like virtuosos...' Fred Crafts, Eugene Register-Guard 12/98 '... will perk up your spirits, cause you to dance, and make you feel good to be alive.' Sam Richardson, Music Sidelines 'In the last of 5 sold-out performances, the eight member group put on an exuberant, classy and wide-ranging display of original tunes and fresh arrangements of tradtional folk and acoustic music that delighted the crowd with humor and musicianship.' Lynn Darroch, The Oregonian 'One can only express a sort of wonder toward the uniqueness of a band that incorporates antique brass instruments and resounding vocal pitch...' Ryan Parker, The O.S.U. Barometer 'The band's music is good-natured, harmonious, and certainly retains it's own individuality.' John Foyston, The Oregonian 'The Trail Band could be Oregon's happiest musical accident. It was formed specifically to perform during a historical play commemorating the Oregon Trail just for 1993. Luckily for us, the band stayed together, recording seven fine CDs and playing some of the sweetest-sounding traditional and old-time music you're likely to hear anywhere.' The Oregonian 'Happy, homespun... a delightful old-fashionedy sound, from spirited fiddles to a spritely brass ensemble...' Eugene Register-Guard 'The Trail Band brought the capacity audience to it's feet more than once. They are just incredibly skilled and great entertainers, too.' The Patrice Press, Tuscon, Arizona The Trail Band is an 8-piece ensemble that creates an energetic blend of brass and string arrangements of traditional and original music featuring five great vocalists including Quarterflash's Rindy Ross. Hundreds of public and private appearances across America and Japan, plus seven successful albums have established The Trail Band as the premiere historic music ensemble from the Northwest. Cornet, tenor horn, tuba, fiddles, hammer dulcimer, guitars, penny whistle, mandolin, piano, saxophone, spoons, bones, drums, bass, and recorders combine with their rich vocal harmonies to create a diverse tapestry of sound inspired by 19th century music. Formed by Marv Ross in 1991 at the request of the Oregon Trail Council to commemorate the 150th anniversary of the trail, the band initially performed music exclusively from and about the era of the Oregon Trail with costumes, diary readings, traditional folk tunes, marches, hoedowns, and Native American melodies. Titled, 'Voices From The Oregon Trail,' this performance piece/CD has been the keystone of the band's repertoire for 10 years. In 1998 The Trail Band was presented the Meritorious Achievement Award by the Oregon-California Trails Association.In 1999 producer Marv Ross was presented an Alumni Award of Excellence from Western Oregon University for The Trail Band's contributions to history, education, and music. The Trail Band's two albums of Oregon Trail music (Voices From The Oregon Trail and Trails End) have been licensed by Oregon State Tourism, The National Historic Oregon Trail Interpretive Center, The End of the Trail Interpretive Center, Oregon Public Broadcasting, and countless school districts. In 1994 The Trail Band created a new show, 'An Old Fashioned Christmas' - a holiday concert reminiscent of the parlour orchestras and townsquare brass bands of the last century. Originally produced as a television special for Oregon Public Broadcasting, this concert/CD has become an annual tradition for thousands of concert-goers in the Northwest and inspired their first live album, 'Christmas With The Trail Band.' In 1998, the band presented a new show and album, 'Immigrant Dreams', featuring music and stories of those who came west to America from Ireland, Scotland, Romania, Mexico, France, Spain, Greece, and other countries during the turn of the century. In 1999 The Trail Band debuted a new show and accompanying album, 'Lewis & Clark', and in 2001 the band released it's seventh recording, a Christmas album titled, 'Making Spirits Bright'. In 2003 the band released 'Oregon Stories', and in 2005 'Peace on Earth.'

Here's what you say about
Trail Band - Peace on Earth: Christmas Collection.

1) Hark the Herald Angels Sing
2) Peace on Earth
3) Aleluya P'urepecha
4) The Longest Night of the Year
5) What Child Is This/The Frost Is All Over
6) Come Home for Christmas
7) Let It Snow (Blower)
8) Have Yourself a Merry Little Christmas
9) Sleighride
10) Joseph Lieber
11) Faltan Cinco P'a Las Doce
12) What Would Santa Claus Say?
13) [Untitled]